The NBA G League, formerly the NBA Development League or NBA D-League, is the NBA’s official minor league, preparing players, coaches, officials, trainers and front office staff for the NBA while acting as the league’s research and development laboratory.

Click here to learn more about the NBA’s partnership with Gatorade.

2. When was the NBA G League established?

The league began play as the NBA Development League beginning with the 2001-02 season. It enters its 18th season in 2018-19 after being renamed the NBA G League.

3. How many teams are in the NBA G League?

There will be 28 NBA G League teams for the 2019-20 season, each singly affiliated with an NBA team.

The 2019-20 season marks the debut of the New Orleans Pelicans’ expansion team, which will begin in Erie as the Bayhawks, and is estimated to relocate to Birmingham, Ala. for the 2022-23 season. The College Park Skyhawks were also re-branded during the 2019 offseason. 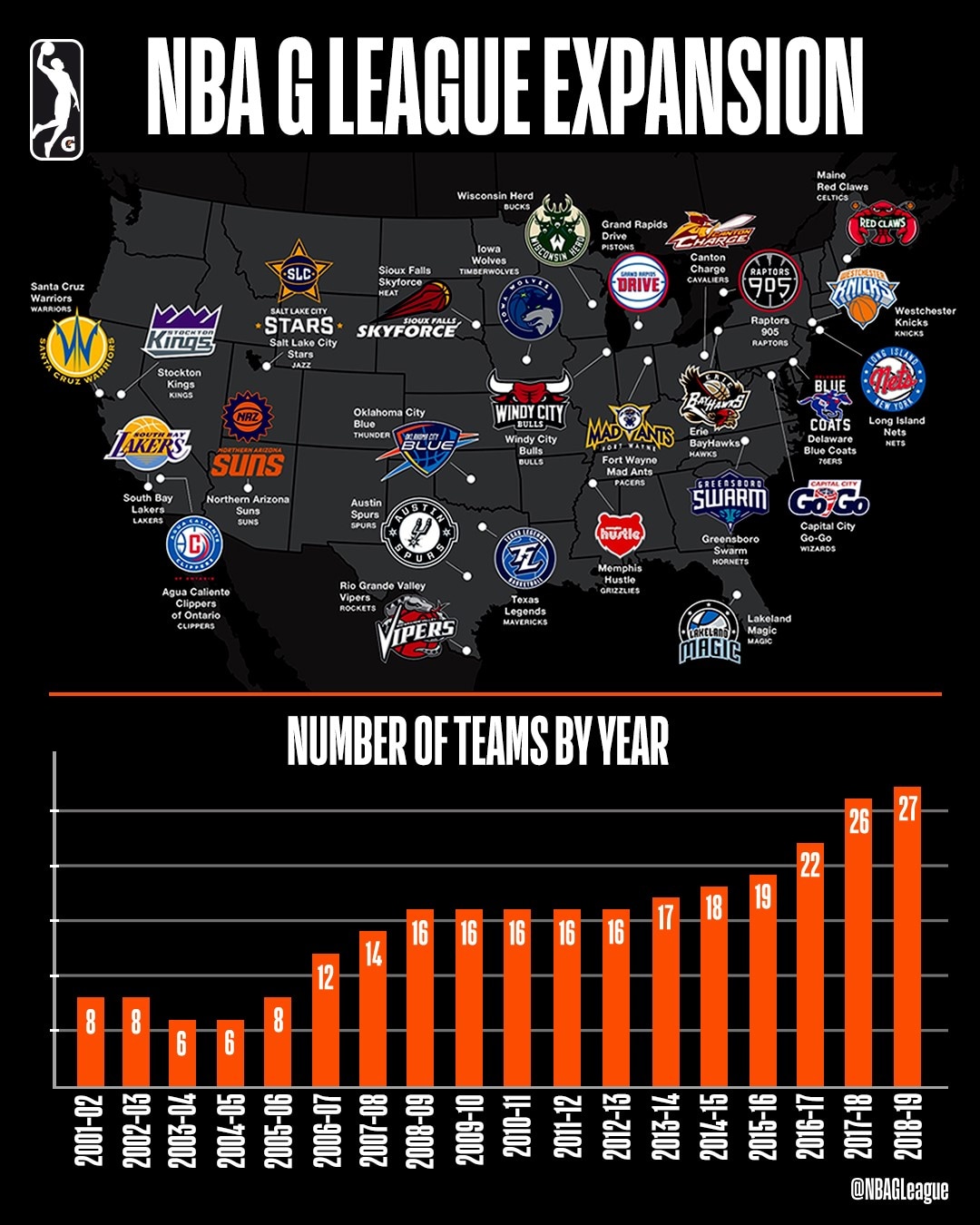 4. How many games are in an NBA G League season?

Each team plays a 50-game schedule.

5. When do the regular season and playoffs begin and end?

In 2018-19, the regular season began on November 2 and ended March 23. The playoffs started on March 26 and finished on April 12, and consisted of four rounds and 12 teams.

8. What is a “Select Contract” and the professional path?

The NBA G League announced a Select Contract as part of a comprehensive professional path that will be available, beginning with the 2019-20 season, to elite prospects who are eligible to play in the NBA G League but not yet eligible for the NBA. The contracts, which will include robust programmatic opportunities for development, are for elite players who are at least 18 years old and will pay $125,000 for the five-month season.

9. How many NBA G League players have made it to the NBA?

At least 30 NBA G League prospects have been called up to the NBA in each of the past eight seasons.  A record 105 players were assigned to the NBA G League a total of 482 times in 2018-19.

10. Who are some of the best NBA players who have played in the NBA G League?

A Call-Up occurs when a player under contract with the NBA G League is signed by an NBA team to an NBA contract. More than 30 NBA G League prospects have received a GATORADE Call-Up in each of the past eight seasons.

An assignment occurs when an NBA team sends a player to its NBA G League affiliate. That player remains under NBA contract and the assigning NBA team has the exclusive rights to recall that player at any time.

Over the past three seasons, an average of 99 NBA players have been assigned to the NBA G League an average total of 465 times (players with under three years of service can be assigned an unlimited number of times each season).

NBA teams may have up to two players under NBA Two-Way Contracts who will spend the bulk of the season in the NBA G League and not more than 45 days with their NBA team. Two-Way players are paid a corresponding daily amount based on the number of days they play in each league. Only players with four or fewer years of NBA service are able to sign Two-Way Contracts, which can be for either one or two seasons.

14. How many teams make the playoffs?

The playoff rules have changed as the league has expanded. For the 2018-19 season, the team with the best regular-season record in each division automatically qualifies for the postseason as one of six “division winners.”  The additional six playoff berths will be filled by the three “wild card” teams in each conference with the best regular-season records, other than the division winners.

The conferences will be seeded one through six, in order of teams with the best record (regardless of division winner).  The top two seeds in each conference will earn a bye into the second round.  The playoffs will begin with three single-elimination rounds before culminating with a best-of-three NBA G League Finals, which will be played in a one-one-one format.

16. Who is eligible to be drafted?

The league signs 100+ players each year to join the pool of draft-eligible prospects. They include college players who went undrafted in the NBA Draft, international prospects, and players who were recently waived by NBA teams following training camp. Players must be 18 years old to be eligible for the NBA G League Draft.

17. How many players are on an NBA G League roster?

There are a minimum of 10 players on rosters, not including a pair of two-way players allowed per NBA team. A team’s active roster may expand to up to 13 players if its parent club assigns players from the NBA roster.

NBA G League players sign standard one-year contracts with the league, not individual teams, according to three different salary scales. (This excludes players on assignment from the NBA, who remain under NBA contract.)

NBA teams may have up to two players under NBA Two-Way Contracts who will spend the bulk of the season in the NBA G League and not more than 45 days with their NBA team. Two-Way players are paid a corresponding daily amount based on the number of days they play in each league. Only players with four or fewer years of NBA service are able to sign Two-Way Contracts, which can be for either one or two seasons.

19. Where do NBA G League players come from? 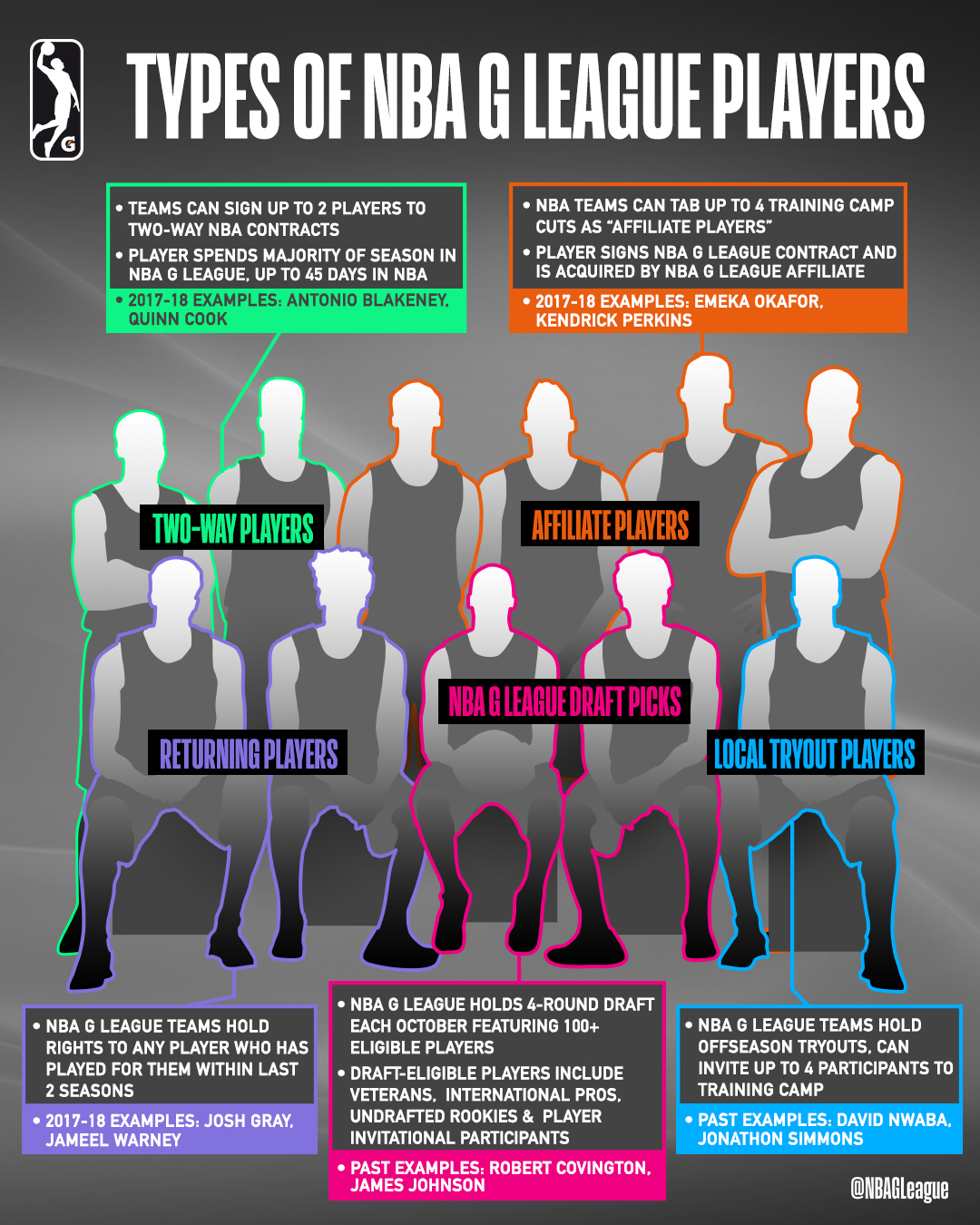 There are 10 different paths a player can take to the NBA G League:

When a new franchise joins the league, an expansion draft is held in which the new team selects 14 players from a pool of unprotected players among the league’s other teams. The expansion team will then hold that player’s NBA G League rights for two seasons. Each returning team can protect up to 12 of its players from being selected.

20. How long are the quarters in an NBA G League game?

Like in the NBA, each quarter lasts 12 minutes. Overtime periods are two minutes compared to the NBA’s five minutes.

Like in the NBA, the shot clock lasts 24 seconds.

22. What are the measurements of the court and equipment?

The rims hang 10 feet from the floor, sitting on opposite ends of a court that’s 50 feet wide and 94 feet long.

Both ends of the floor feature a free throw line, 15 feet from the rim, and a 3-point arc that runs from 23 feet, 9 inches from the basket at the top of the perimeter to 22 feet at the baselines. The corner 3-pointer has become one of the league’s most popular shots because of the difference.

The basketball itself has a circumference within a maximum of 29 inches and a minimum of 28.5 inches and has a pressure between 7.5 and 8.6 pounds.

Yes. The NBA uses the NBA G League as a testing ground for new rules each season.

Beginning in the 2018-19 season, the following rules were placed in NBA G League games:

14-Second Reset on Advance: The shot clock will reset to 14 seconds or will remain the same, whichever is lower, anytime the ball is advanced to the frontcourt following a reset (formerly known as a reset timeout) or a team timeout.

Transition Take Foul: A transition take foul occurs when a defender commits a take foul (a foul in which the defender does not make a play on the ball) against an offensive player who has the ball or has just released a pass; a foul is committed during a transition scoring opportunity; and a foul does not meet the criteria for a clear path foul.  The fouled team may select any player in the game to shoot one free throw and retains the ball at the point of interruption.

The NBA G League will continue to play with experimental rules that were already implemented, including two-minute overtime periods, the coach’s challenge, resets and the away-from-the-play foul rule.

These rules were introduced prior to the 2017-18 season:

Reset Timeouts: Each team will be entitled to a “Reset Timeout” in the final two minutes of the fourth quarter and final two minutes of any overtime period.  “Reset Timeouts” do not allow teams to huddle, but otherwise mirror standard timeouts, allowing teams to advance the ball (when applicable) and make unlimited substitutions.  If either team huddles or prevents the ball from immediately being put back into play, it will result in a delay of game being issued to the offending team.  The “Reset Timeout” replaces the “Advance Rule” which had been used in the NBA G League the past two seasons.

Shot clock reset: The 24-second clock will reset to 14 seconds after an offensive rebound or when the offensive team otherwise is the first team to retain possession after the ball contacts the rim

Team foul limits increased from four per period to five per period before free throws are rewarded.

Timeouts: Each team will be allocated seven timeouts per game and all timeouts will be known as “Team Timeouts,” with no distinction between full and 30-second timeouts.  The following timeout structure will be implemented:

Prior to the 2017-18 season, instant replay triggers were reduced to the following five circumstances:

24. Where can I buy tickets to an NBA G League game?

Tickets for every team are available on each team’s website. Go to gleague.nba.com/tickets for more information.

25. Has an NBA G League player ever been drafted into the NBA?

Seven players have been drafted into the NBA out of the NBA G League. These players entered the NBA G League either out of high school – the league’s age minimum is 18 rather than the NBA’s 19 – or as early entry college players.

26. What do affiliations between NBA and NBA G Leagues entail?

NBA teams primarily use their NBA G League affiliates as a place to develop their young talent. Players with three years of service or less can be sent, or “assigned,” to the NBA G League an unlimited number of times. The NBA team retains an assigned player’s rights and can recall that player at any time.

NBA teams often install the same offensive and defensive systems – including the same terminology and even some of the same plays – on their NBA G League affiliates. The staffs within the organization are in constant communication about the development of their major- and minor-league talent.

27. How do NBA franchises not affiliated with an NBA G League team assign players?

The NBA G League’s flexible assignment system – which was instituted prior to the 2014-15 season – enables independent NBA teams to assign players to the NBA G League for development or rehabilitation from injury.

28. What is the NBA G League Winter Showcase?

NBA G League Winter Showcase is the NBA G League’s annual in-season scouting event, when all of its teams converge in one city to play in front of NBA general managers and player personnel executives from all 30 NBA teams. The 2018 event — Dec. 19-22 in Las Vegas, Nevada — marked the 15th Showcase.

Each season, from early January to early April, NBA teams can sign free agents to 10-day contracts. A player can be signed to a maximum of two consecutive 10-day contracts before a team must either sign him for the remainder of the season or release him.

30. Which teams have won the most NBA G League titles?

31. Who is the NBA G League’s all-time leading scorer, rebounder and passer?

The league holds a National Tryout once each year. Participants must fill out an application and make a $500 online payment. The event is limited to 200 players.

Additionally, each NBA G League team holds its own local tryout(s) prior to the start of the season and can invite up to five of the participants to its preseason training camp.