The 2019-20 NBA G League season is set to tip-off on Friday. In anticipation of season No. 19, here are 10 things fans should know as they tune in to the action.

College Park Skyhawks Join The Frey: With a roster highlighted by Hawks Two-Way Players Brandon Goodwin and Charles Brown Jr. and a team partially owned by rapper 2 Chainz, the expansion Skyhawks will enter the NBA G League as its 28th team. They’ll play at the all-new Gateway Center at College Park.

Alumni Becoming Household NBA Names: A record 42 percent of NBA players on this season’s opening night rosters had NBA G League experience at some point in their careers. Notable alumni to find success in The Association include Most Improved Player Pascal Siakam, Defensive Player of the Year Rudy Gobert, and Khris Middleton, who emerged as the first-ever NBA G League alum turned NBA all-star last season. 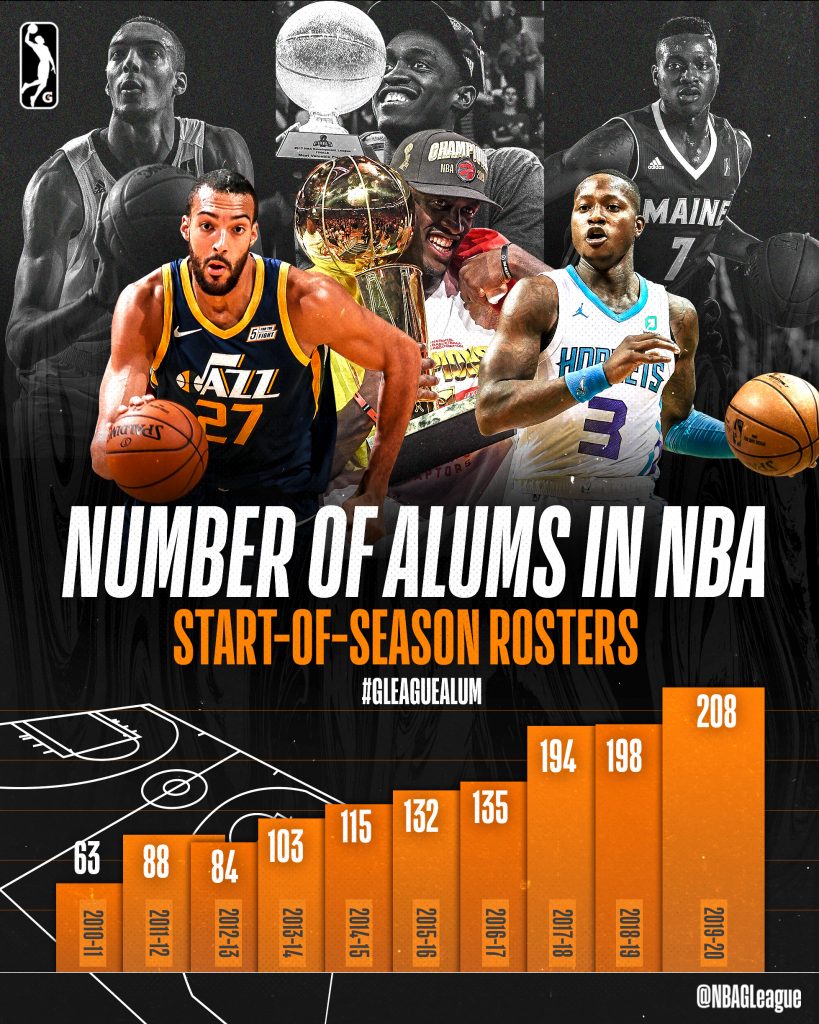 Potential NBA Call-Ups: Last season, NBA veterans like John Jenkins, Terrence Jones, and JaKarr Sampson returned to The Association with NBA call-ups from the G League. Andre Ingram followed up his Cinderella Story with another promotion, and Mitch Creek made his long-awaited NBA debut after much time abroad and in the states. These are just a few of the highlights from the 55 call-ups of 48 players from last season. As the talent level continues to rise, who will follow in their footsteps?

NBA Assignments: Some of the NBA’s most promising players suited up for NBA G League affiliates last season, hoping to gain valuable experience and exposure. 2019 NBA G League Finals MVP Isaiah Hartenstein led the Vipers to a championship by way of the Houston Rockets. After getting his Two-Way contract converted, eventual MVP and DPOY Chris Boucher returned to the Raptors 905 quite often as a big league assignee. 2018 1st Round NBA Draft picks like Lonnie Walker IV, Grayson Allen, and Donte DiVincenzo all suited up for minor league affiliates during the Winter Showcase, adding a whole other layer to the already stiff competition in Las Vegas. The NBA G League is a proving ground, even for NBA players aiming to prove they can handle more responsibility, and it’s a trend that should only continue.

Two-Way Contracts: Prior to the 2017-18 season, NBA rosters expanded from 15 to 17 players. These two additional players are permitted to spend up to 45 days in the NBA while playing the rest of the season with an NBA G League affiliate. This year’s crop of Two-Way Players includes exciting young talent like Kostas Antetokounmpo (South Bay Lakers) and Tacko Fall (Maine Red Claws). For Two-Way Players to keep an eye on, click here.

Showcase Tournament In Las Vegas: Returning to Las Vegas for a second straight year (Dec. 19-22 at the Mandalay Bay Convention Center), the 2019 MGM Resorts NBA G League Winter Showcase will introduce a new tournament format and a $100,000 prize for players on the winning team. Click here for seeding guidelines and additional information.

New Experimental Rule: Under a new experimental NBA G League rule, one free throw worth one, two or three points will be awarded in the event of any foul that would typically result in one, two or three free throw attempts under standard NBA rules.  The experimental free throw rule will not apply during the last two minutes of the fourth quarter or the entirety of any overtime period. In addition, previously announced experimental rules will continue to be implemented. For more info, click here.

A Competitive Quest: Each team will play a 50-game schedule during the regular season. Twelve teams will make the postseason, beginning with three single-elimination rounds before the two top dogs battle it out in a best-of-3 Finals. The Rio Grande Valley Vipers are the defending champions after defeating the Long Island Nets in the 2019 NBA G League Finals.

New Look BayHawks: The BayHawks have long been an NBA G League staple, but this year they’ll compete with yet another new affiliation. The roster features all new players, including Hornets Two-Way Players Zylan Cheatham and Josh Gray. New Orleans’ NBA G League affiliate will play in Erie this season, while its permanent home at the Birmingham-Jefferson Convention Complex (BJCC) undergoes renovations. The name and identity of the team in Birmingham will be announced at a later date, with plans to begin play there during the 2022-23 season.