NBADLeague.com and @NBADLeague are on the scene as the Santa Cruz Warriors and Fort Wayne Mad Ants play for the 2015 NBA Development League championship.

From shootarounds to the final buzzer and everything in between, go behind the scenes in our 2015 Finals blog:

Klay Thompson, Draymond Green in the Building for Game 2

Making quick work of the New Orleans Pelicans freed up the Golden State Warriors schedule during the normally hectic playoff time, and Klay Thompson and Draymond Green used the time to catch the NBA D-League Finals at Kaiser Permanente Arena, about 70 miles south of Oracle Arena.

what a halftime show here in Santa Cruz!! @dleaguewarriors #DLeagueFinals

Like younger brother, like older brother. Warriors forward Taylor Griffin slips the screen, cocks it back and throws down the slam to energize the Santa Cruz crowd:

After losses in two straight NBA D-League Finals, the Santa Cruz Warriors have taken the Kaiser Permanente Arena floor with a chance to clinch their first-ever title, while the Fort Wayne Mad Ants are looking to force a winner-take-all Game 3 on Monday night.

The @DLeagueWarriors' Aaron Craft is the first one out on the floor #DLeagueFinals 7pmET on @ESPNU pic.twitter.com/Dgk7ViQtp5

#Gameday is HERE!! Breakfast of…… pic.twitter.com/lvWhgJpcT9

. @DLeagueWarriors Thanks for that extra motivation for the guys! See you tomorrow. #MADANTSBASKETBALL

Santa Cruz will have a different starting power forward in Game 2 on Sunday night after James Michael McAdoo’s assignment from Golden State on Saturday.

It’s been a whirlwind season for the rookie out of UNC, who was called up in January after impressing Golden State with his stellar play in Santa Cruz.

“Right now, it hasn’t really hit me — to be on the best team in the NBA,” he said afterward. “The path that I’ve gone to get there is really unheard of.”

Saturday, 6:30 PM ET: The Mad Ants Are in the Building

NBA vet Jordan Crawford on Fort Wayne’s 10-3 record since he joined the team after a season in China:

“When I got here, we all gelled together. I came to the Development League to show teams that I’m ready to be back in the NBA. I didn’t think that we’d be in the D-League championship right away.

So once I was here, I accepted it. And I was fortunate enough that [the Mad Ants] accepted me, so I thought, ‘might as well try to do all that you can do.’ And it’s fun winning.”

Practice is underway at Kaiser Permanente Arena in Santa Cruz. Game 2 tips off Sunday at 7pm EST on @ESPNU. pic.twitter.com/mh3NOi5cmh

After a travel day on Friday, it’s back to work for the Warriors and Mad Ants as the series shifts to Santa Cruz. Both teams are holding shootarounds on Saturday at Kaiser Permanente Arena ahead of Game 2, 7 PM ET on ESPNU — when Santa Cruz has the chance to clinch the title with a win. 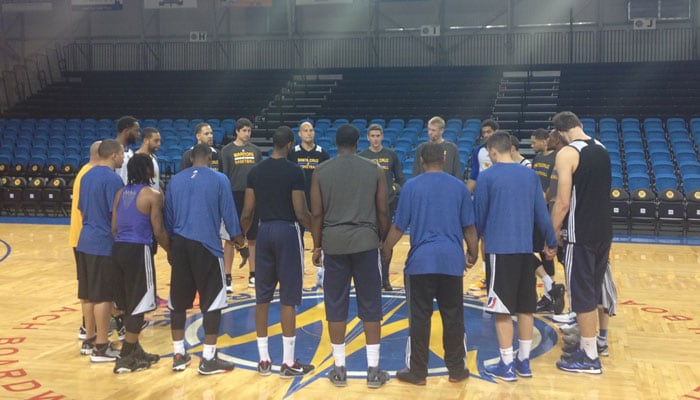 The wild night for Dub Nation had former SC Warrior Seth Curry jumping out of his seat:

Check out more photos of the two teams preparing for the championship matchup: 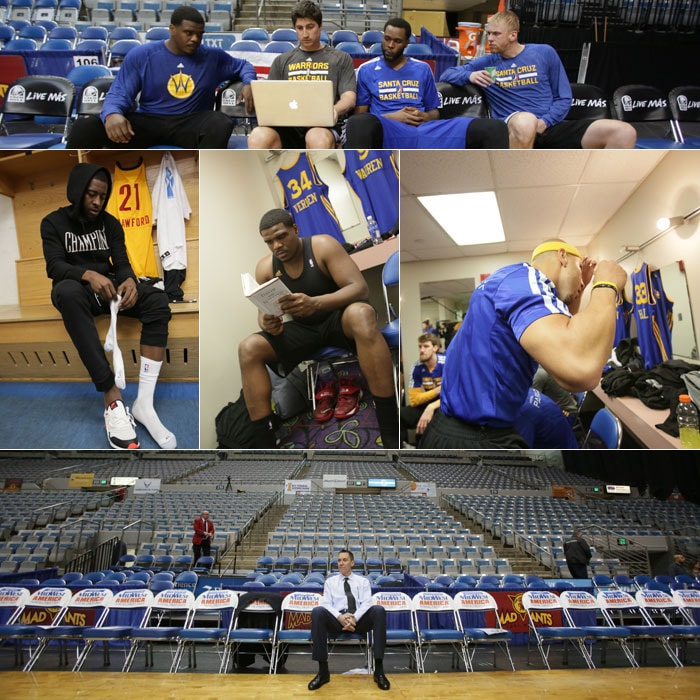 Three Pacers in the House at Game 1

CJ Miles and George Hill on hand to support @pacers teammate Shayne Whittington with the @fortwaynemadants! #DLeagueFinals (via "NBADLeague" on Snapchat)

While rookie teammate Shayne Whittington took the floor on assignment with the Mad Ants, Indiana Pacers George Hill, C.J. Miles and Damjan Rudez supported their teammates from the sidelines during Game 1 in Fort Wayne.

Indiana is the closest of the Mad Ants’ 13 NBA affiliates, and Mad Ants star forward C.J. Fair spent much of the summer with the Pacers before missing the opening night cut.

Game 1 Warm-Ups at the Coliseum

From Hawks big man Mike Muscala (assigned for six games this season), Clippers wing Dahntay Jones (called up in January after 19 games) and the playoff hero from a year ago, Tony Mitchell.

Let’s go @TheMadAnts ! Best of luck to my guys in the @nbadleague Finals tonight.

.@TheMadAnts good luck to the #MadAntsBasketball family. Go get that trophy boys #repeat

The Vet: Ramon Harris on the Rematch

Thirty-two different players suited up for the Fort Wayne Mad Ants during the 2014-15 season, a consequence of having 13 NBA affiliates in a league where the other 17 teams are singly affiliate with an NBA franchise.

That didn’t stop them from reaching the Finals for the second straight season after sneaking into the playoffs as the East’s No. 4 seed and extending their postseason winning streak to 10 straight games.

The constants have been head coach Conner Henry and three-year Fort Wayne vet Ramon Harris, who’s emerged as one of the emotional leaders in the locker room.

The 26-year-old former Kentucky Wildcat — who delivered the postgame speech amid last year’s title celebration (see above) with an almost entirely different group — is not surprised that the Warriors are also back in this position.

“I just felt like if we made it, that would be the team that we could face, and here we are.”

The @DLeagueWarriors 🔒in during their walk-through prior to Game 1 tonight, 8pmET on @ESPNU #DLeagueFinals pic.twitter.com/KkG30Tj8Z1

The namesake of the @fortwaynemadants is ready…are you? The championship charge begins again tonight at 8pmET, televised live on ESPNU