NBADLeague.com and @NBADLeague are on the scene as the Sioux Falls Skyforce and Los Angeles D-Fenders play for the 2016 NBA D-League title.

Do Or Die: Getting Set for Decisive Game 3

It’s winner take all in Sioux Falls, S.D. on Wednesday night as the season for the Skyforce and D-Fenders comes down to one championship game.

.@SFSkyforce take the court in front of their home crowd before Game 3 against @DFenders, 8pmEST on @ESPNU! 😤 pic.twitter.com/h2H2zev8GC

@veezyv, who dropped 29 points while playing ALL 48 minutes in Game 2, is still feeling it before Game 3 of the 2016 #DLeagueFinals! @ladfenders vs. @sfskyforce at 8pmEST on ESPNU!

Tip-Off at the Sanford Pentagon

The Skyforce are on the brink of a championship and the D-Fenders are facing an elimination game.

That’s what’s at stake as the two teams get ready for Game 2 on Tuesday night (8 PM ET, ESPNU) at the Sanford Pentagon. Sioux Falls leads the best-of-three series, 1-0. If L.A. wins tonight, Game 3 would be Wednesday at the same time.

The NBA D-League Finals have shifted to a city rich with minor-league basketball tradition. The Skyforce have been a fixture in Sioux Falls since 1989, but on Tuesday night will look to clinch their first NBA D-League title.

Sights from morning shootarounds before Game 2 of the best-of-three series (8 PM ET, ESPNU):

A brief history of @SFSkyforce, who look to add to their 🏆🏆🏆 case with their 1st #NBADLeague championship! 💯 pic.twitter.com/0BXmSK8haK 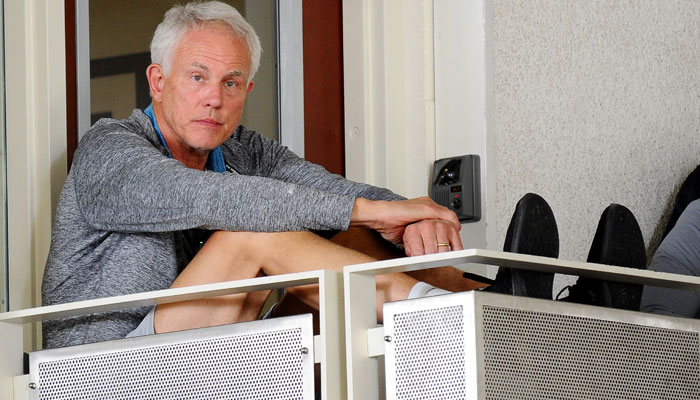 There are a host of benefits to the D-Fenders sharing a gym with the Lakers at the Toyota Sports Center. As D-Fenders star Vander Blue said, “It’s the Lakers, man. It’s the Lakers’ facility. Kobe’s blood, sweat and tears are in here. You see O’Neal, Magic. I mean, why would you not want to be here and work hard and be in a position to make your dream come true?”

Another benefit: you quite literally know that NBA eyes are watching every single time you play. Longtime Lakers general manager Mitch Kupchak likes to sit at the top of the stairs outside his office, which overlooks the court, and take in the action. He did so in Game 1 as the Skyforce outlasted the D-Fenders, 104-99.

Set for Tip-Off in El Segundo

Less than 30 hours before tip-off, the two teams hit the D-Fenders home gym — the Toyota Sports Center in El Segundo, Calif., which doubles as the Lakers’ practice facility — for final preparations.

Ryan Gomes taking a trip down memory lane.
Look for the segment on @ESPNU at halftime of tomorrow's game! pic.twitter.com/u1EC9eNXX8

Yet there’s no secret to their success. Every year, one NBA D-League team combines top-level talent with a collective buying-in from their players.

“That group in there, it’s selfless,” said head coach Dan Craig. “It’s not about who’s doing well, who’s scoring, who’s playing. And it starts there: really buying into the team, which can be hard to do. This is a league where guys are trying to better their situations and get Call-Ups and get deals overseas. We’ve had the motto of, ‘If we all look good and we do it as a team, individually we look good. Let’s to do it together.’”

“I think we all want each other to do well on the court, and it’s like a family organization,” said Skyforce center Keith Benson, one of six Sioux Falls players who spent time with the Heat over the summer. “A lot of us came from training camp with the Heat, so that helps. So we knew each other before everything started. Our coaches focus on defense. We’ve been playing the same system, so we just play hard. I don’t think people were expecting us to be this good, but I knew the type of talent we had.”