But in recent years, it’s not just the big-leaguers who’ve put on a show. The NBA D-League’s dunk contest has lived up to the standards of the main event since it was first added to the festivities in 2008.

Who’s ready to join James “Flight” White, Tony Mitchell and others who have made a name for themselves on the minor-league stage?

Meet the six-man field for the 2016 NBA D-League Slam Dunk presented by Verizon, which will be held at halftime of the NBA D-League All-Star Game at Toronto’s Ricoh Coliseum (2 p.m. ET start on Saturday, February 13):

Dunker Profile: Threatt has pogo-stick hops, but uses his athleticism more to explode past defenders that make plays above the rim during games. So his jaw-dropping performance at the Barclays Center a year ago seemingly came out of nowhere. He enters this contest as a known commodity: the defending champ.

Dunker Profile: Tokoto launched an assault on NBA D-League rims from the moment he stepped foot on the court; his very first bucket was a posterizing dunk. It’s hard not to see him as Threatt’s biggest challenger after putting together the in-game dunk reel he’s put together over his first 30 pro games.

Dunker Profile: “Freak of nature” was the term often used to describe Stephens during his days at Memphis. He threw down so many highlight-worthy dunks in college that a Memphis fan spliced every single one of them together in a 5-minute YouTube hit. Stephens then posted the highest “no step vert” (40 inches) and max vert (46 inches) in the history of the NBA Draft Combine. Needless to say, he is built for this event.

Dunker Profile: Lemon has made a splash during his first NBA D-League season, which included this incredible steal and slam to seal a Mad Ants victory (he would eventually get up and make the ensuing free throw). The former Bradley star is another contender in a loaded field, considering that he held his own at the NCAA’s dunk contest following his senior season.

Dunker Profile: Like Lemon, Sykes was a small-school stud (Wisconsin-Green Bay) who stepped into the national spotlight in the college dunk contest (this past April). At 5-11, he regularly got up for alley-oops and has flashed his 45-inch vertical at times with the Austin Spurs during his rookie season. 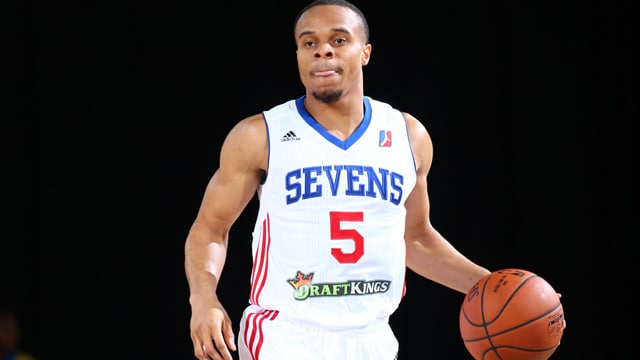 Dunker Profile: A sub who has played in limited minutes this season and just got traded to his third team, Jordan enters the dunk contest having not thrown down a dunk all season. But don’t count him out for that reason; as a Texas A&M Corpus Christi Islander, Jordan showed why he’s the dark horse among this field.