Just about a year ago, Michael Jordan walked into the home locker room at NRG Stadium. He saw 16 crestfallen young men, tears streaming down their faces. The North Carolina Tar Heels had just lost the NCAA National Championship on a buzzer-beating three-pointer by Villanova. Two of the team’s seniors, Marcus Paige and Brice Johnson, sat with their heads down, as Jordan delivered an eloquent speech about not giving up and looking forward to the future.

“I couldn’t tell you one word he said during that entire speech,” Brice Johnson said, pausing as if searching for the words somewhere in the deep recesses of his subconscious. “I don’t remember anything. I was crying too hard.”

It wasn’t supposed to end this way. Only minutes earlier, Brice’s self-described “brother,” Marcus, had just double-clutched in mid-air to drain a miraculous three with five seconds remaining in the game.

“Yeah, absolutely [I knew it was going in],” Brice said.

“I thought for sure we were going to overtime after that,” says Marcus.

With 4.7 seconds left, Villanova inbounded the ball to Ryan Arcidiacano. He drove the length of the court before stopping and flipping the ball back to the trailing Kris Jenkins for a last-ditch three-point attempt.

“Come down full court, pitch it back to the trailer, shoot a 27-footer for the game. I’d never seen anything like it,” Paige recalled.

“It felt like the ball was in the air forever,” Paige said. “As soon as he let it go, you could feel that it was going in.”

That it did, and UNC lost right as the final buzzer sounded. 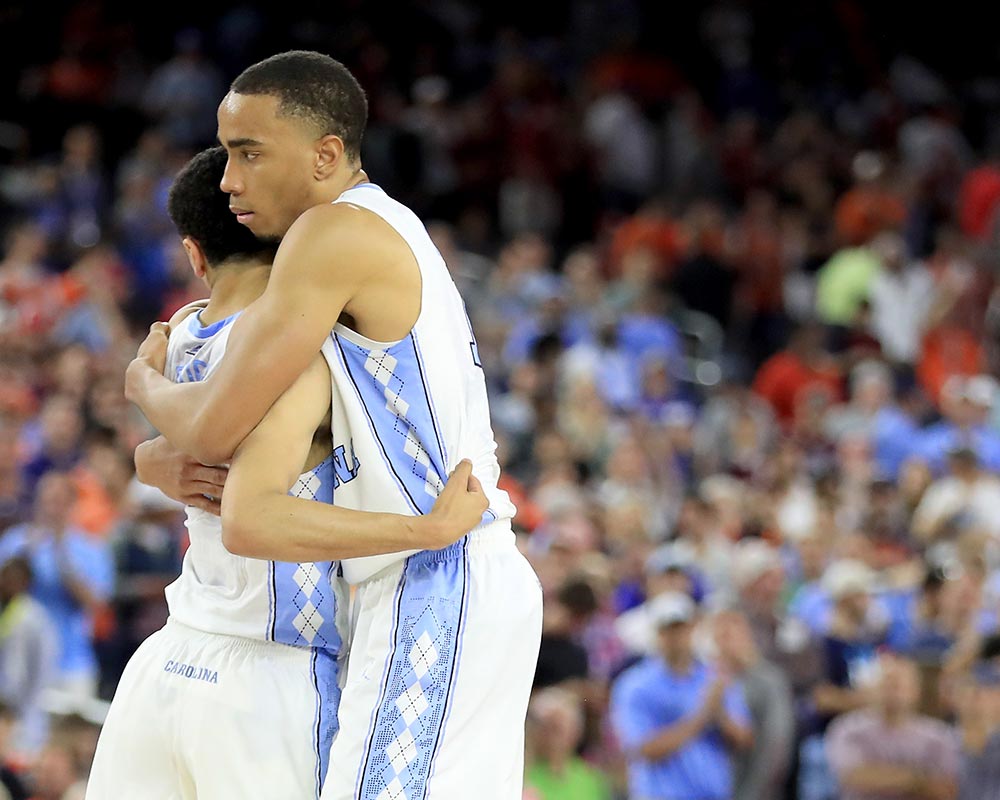 In the summer of 2011, Paige and Johnson moved into the dormitories at Chapel Hill. The bright-eyed freshmen were assigned as roommates for team road trips and immediately developed a strong friendship.

“We lived together for four years at Chapel Hill,” Paige reminisced, now a pro with the NBA D-League’s Salt Lake City Stars (affiliate of the Utah Jazz). “We roomed together on the road. He’s going to be at my wedding. I would say we’re pretty good friends.”

“Marcus twitches in his sleep. It scared me [when we were on the road],” joked Brice, who recently joined Paige in Salt Lake City after being assigned from the LA Clippers.

The pair played in four NCAA tournaments during their time at UNC. Both said those experiences helped to develop the special bond between them as well as with their teammates.

“The postseason was the most fun part of my four years at college,” Marcus said. “We spent so much time on planes, buses, hotels just hanging out with each other from one weekend to the next.”

If Brice and Marcus were like brothers at school, then head coach Roy Williams was like their father. Both credit the esteemed coach for helping mentor them throughout their four years at school.

“He was like my father away from home,” Brice said. “He taught me a lot of things on the court but more so off the court, like how to be a man. Just those general lessons helped me over the past four years and even right now in the NBA, and I thank him for it.”

“I don’t think I would want anyone else to coach me if I could do it over again,” Marcus said.

On NBA Draft night, Marcus and Brice both heard their names called. The Los Angeles Clippers selected Brice with the 25th pick. The Nets selected Marcus with the 55th pick, but traded him to the Utah Jazz. For the first time in four years, Marcus and Brice were no longer teammates.

Brice stayed on the Clippers roster, but suffered a herniated disk that sidelined him for most of the season.

Marcus was waived by the Jazz and acquired by the Stars. (He is technically a free agent who can be called up by any of the 30 NBA teams.)

Brice rehabbed from his injury, and the Clippers wanted him to get playing time under less pressured circumstances. On March 7, Brice was assigned to Salt Lake City, reuniting him with his “brother.”

It was just like old times for the two as they reconnected after being apart for several months. They used the time to learn about each other’s differing journeys at the professional level. After a recent game, Brice and Marcus went out to eat at P.F. Changs and ran into an unexpected old friend.

“We went to dinner and [Tyler Hansbrough] just shows up out of nowhere and decides to join us,” Brice said.

Hansbrough, one of the greatest Tar Heels in UNC history, recently joined the NBA D-League after a hiatus from basketball and was in town for a game.

“Tyler spent the first six or seven years of his career in the NBA. And now Tyler, being in the D-League, can relate to what I’m going through,” Marcus said. “Brice up until last week has been solely in the NBA. It was just cool to hear everyone’s different perspective on the kind of grind it is and all catch up on what we’ve been up to.”

After spending a few days in Utah, Brice was recalled by the Clippers, ending his brief stint with Marcus as D-League teammates. Brice is looking forward to practicing with his NBA teammates, contributing to their playoff push, and learning as much as he can from Clippers special assistant Kevin Garnett.

“He’s showing me the ropes. Showing me how to counter, just different things. I’ve got to get back that killer mentality that he had, so I can ball like he did.”

His superstar teammate, Blake Griffin, has also looked out for Brice. “Blake’s really been helping me throughout this process. He didn’t get to play his first year and look where he is now. Hopefully that will happen for me.”

Meanwhile, Marcus is looking to finish the season strong and make a good final impression on any scouts watching him play.

“My main goals are in the offseason. I’d like to add 10 pounds, get a little bit stronger and keep working on finishing around the basket.”

Marcus and Brice both had their jersey numbers raised to the rafters at North Carolina’s Smith Center in February. Both are certainly looking forward to the NCAA tournament and watching their No. 1-seeded Tar Heels. Both believe that Kansas is a major threat, but also believe that their alma mater is poised to rewrite last year’s painful ending. Even though Brice and Marcus’s paths have separated once more, they are still united through their common love for their school.

“We had a great time in college and now we’re on to bigger and better things,” Brice said matter-of-factly. “Hopefully one day we’ll end up on the same team in the NBA. I’m gonna root for Marcus no matter what though.”

He pauses mid-thought. “…Unless he’s playing against me.”