After their 10th straight playoff win, the Fort Wayne Mad Ants are headed to the NBA Development League Finals for the second straight year. But while the results have been the same, the cast of characters has changed.

Out are seven-year Fort Wayne vet Ron Howard — aka “Mr. Mad Ant” — and gunslinging running mate Tony Mitchell (highlights). In their place is a pair of players at very different stages of their career but who have combined to carry the load Howard and Mitchell carried a year ago.

C.J. Fair has been Fort Wayne’s Howard-like rock from Day 1; in fact, he’s one of two Mad Ants who appeared in all 50 games this season (vet Ramon Harris is the other) and one of just three players still on the roster from training camp (with 13 NBA affiliates, the Mad Ants have seen more turnover than any other NBADL team). 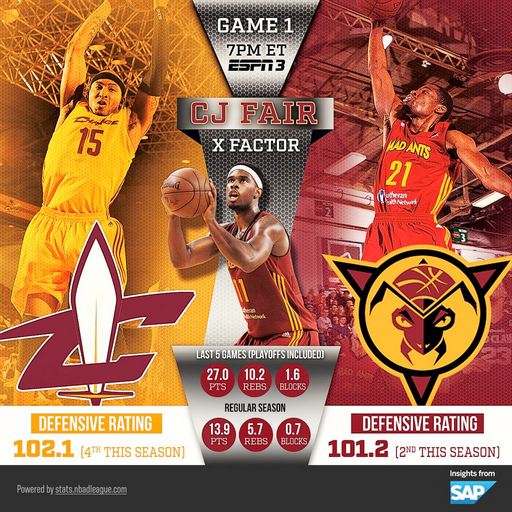 The undrafted Fair faced an adjustment coming from Syracuse’s deliberate style of play to the wide-open full-court game of the NBA D-League, and he found his groove right in time for the playoffs. His field goal percentage increased in each of his first four months as a pro — from 41% in November to 52% in February — as he made the difficult transition from college power forward to pro wing.

But Fair has rediscovered the all-ACC form he showcased at Syracuse by returning to his roots as a small-ball 4-man, eventually emerging as a fast break weapon and capable mid-range shooter. After posting just two 20-point outings through the first three months of the season, he’s tallied 13 over the past seven weeks (including 20+ in all four playoff wins), ranking fourth in the league in playoff scoring at 26.0 points per game on 55% shooting.

While Fair owns the interior, it’s been four-year NBA vet Jordan Crawford doing the damage from the perimeter. The 26-year-old is essentially Fort Wayne’s hired gun, having been lost in the NBA shuffle following a season in China.

And he’s stepped right into Mitchell’s role as the Mad Ants’ free-lancing playmaker in the backcourt, where head coach Conner Henry gives him the freedom to take the ball and go to work. Crawford’s volume scoring — 27+ points in each of their first four playoff games — has Henry in position to win a second straight championship and allows Crawford to audition as a Jamal Crawford-type “microwave” off an NBA bench.