It usually starts when the ball leaves James Harden’s hands. Sometimes it’s a half court lob, other times a simple flick in the paint. It doesn’t really matter; it’s all going to the same place. Like a supersonic jet plane, Clint Capela has already soared by before defenders even realize that familiar boom is soon to follow. He usually catches the ball at its apex; that’s when its trajectory veers at almost a 90-degree angle. Because once Capela’s hands are wrapped around the ball, he jams it straight down through the hoop.

As hard as it is to believe, the 22-year-old Capela wasn’t always an alley-oop extraordinaire. Before he was the starting center for the No. 3 seeded Houston Rockets, competing for an NBA championship, he was a boy living in an orphanage in Switzerland. Before he leveled defenders with sturdy picks, threw down highlight dunks, and emphatically rejected shots at the rim, he was just a shy kid with a soccer ball.

Capela’s parents emigrated from Africa to Switzerland, his mother from Congo and his father from Angola. They met in the European country where Capela was later born. He doesn’t know much about his father, who left the family when Capela was a boy.

Capela’s first love was soccer. He grew up playing it at the welfare orphanage where he and his brother lived while they attended elementary school. It wasn’t until Capela hit a growth spurt at the age of 13 that he began to seriously consider basketball.

“My older brother was playing [basketball] at first and he was asking me if I wanted to try it,” Capela said in his soft-spoken, Swiss-tinged accent. “He advised me to try it.”

Capela and his brother watched NBA highlights to learn the fundamentals. During a tournament in France when he was 14, Capela ran into a fellow Swiss NBA player, Thabo Sefolosha.

“Thabo was my guy,” Capela explained. “Whatever I was doing, I was trying to do like him. I was looking at how he went from Switzerland to France to the NBA, so I was trying to do the same thing. I was really shy though, so it was hard to ask questions, but I did.”

Capela ended up following in Sefolosha’s footsteps by heading to France at age 15 to play for an Academy in Chalon. From there, Capela joined the same top-tier Chalon EuroLeague basketball team that Sefolosha had played for 10 years earlier. Years later, when they faced each other for the first time in the NBA, Sefolosha told Capela that he was proud of him.

Although Capela was named the “Best Young Player” in the EuroLeague, it wasn’t until 2014 that NBA teams began to seriously scout the young international prospect.

“During the summer, I was with the Swiss team during the Euro Championship, and this is when I was really noticed,” he said. “I was really dominating, so that’s when [the scouts] started talking about me.” 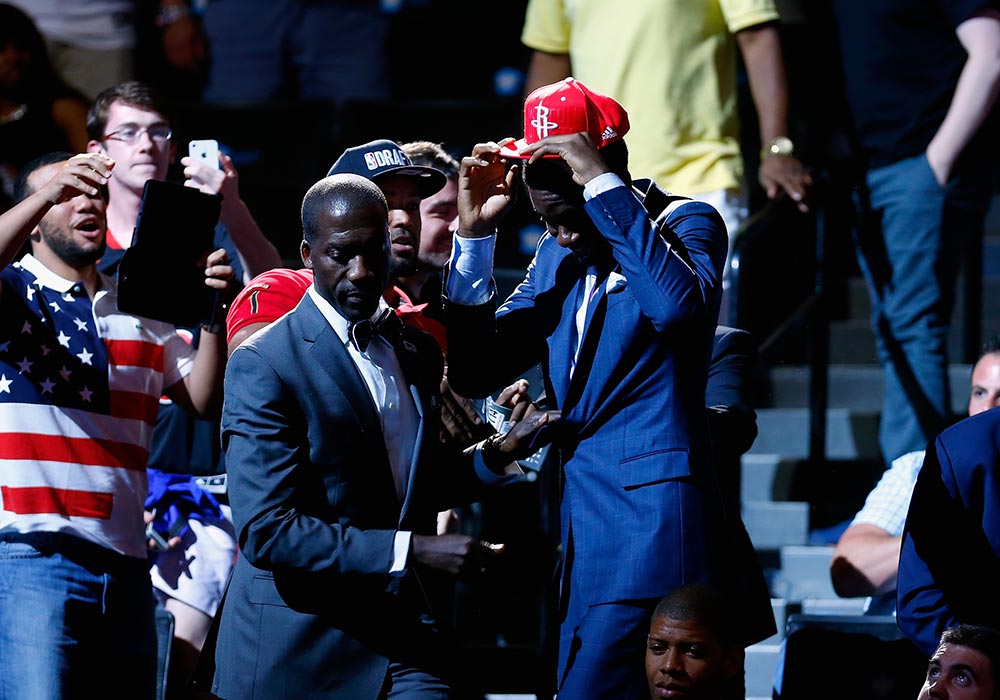 Capela was nervous as he approached Commissioner Adam Silver on the Barclays Center stage. Draft night is usually a euphoric experience for the 60 lucky players that are selected. Capela, however, wasn’t just beginning a journey with a new team, but also in a new country.

“It was weird being drafted because whenever you haven’t played there [before], you don’t really know what is going to happen,” he said. “I’ve heard of a lot of players who were drafted but didn’t make it.”

Furthermore, Capela was amazed he’d soon be playing with guys he had grown up watching and imitating: “It was hard to believe that I would have teammates like that, like superstars.”

At first, Capela was overwhelmed by the culture shock: “When I first got to the locker room, it was really hard how to understand how to use the locker room, training room, all the stuff that they had here,” Capela said. “Just where am I going to work out? But once I started doing it, I stopped thinking about it. I just tried to be focused.”

Capela was delighted to send large portions of his rookie paycheck back to his mother in Switzerland. After 30 long years working in a factory and still in heavy debt, she was finally able to retire. 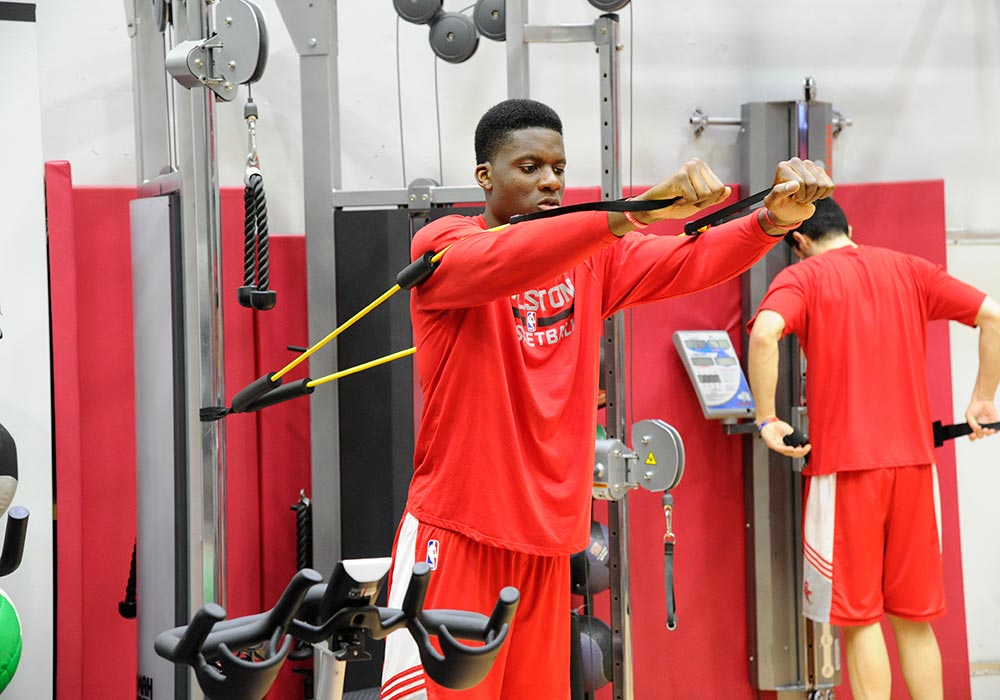 Before Capela would get his chance to shine in Houston, he first had to pay his dues in McAllen, Texas. The organization assigned Capela to play for the team’s D-League affiliate, the Rio Grande Valley Vipers, to develop his game and work his way back from an offseason groin injury.

“They did a great job developing him, putting him in the system. You’re a screener, you’re a roller. He can finish at the rim, he can blocks shots. Just playing hard, playing the right way,” said Vipers head coach Matt Brase, who served as Houston’s director of player development from 2013-15. “[It’s] a great tribute to Clint for working hard, and putting it all together with all of the work.”

“I realized how much it helped me to play there,” Capela said. “Especially because I was coming from overseas. At first it was really hard because you get drafted and think NBA, but it actually really helped me to adapt to the different rules, athleticism, and game.”

After the season, Capela was given a spot on the Rockets roster. “[The D-League is something] that you’re never gonna forget and will make you appreciate being able to play in an NBA playoff game.” 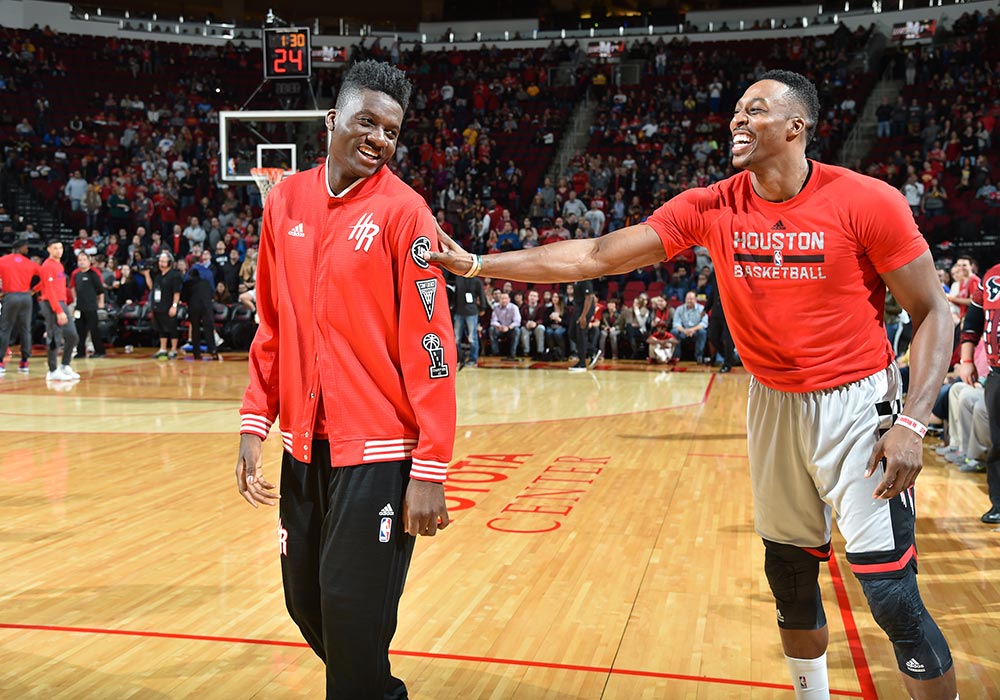 In the fall of 2015, Capela was dwarfed by Dwight Howard’s shadow both literally and figuratively. Howard was the Rockets star center and had just helped lead the team to the Western Conference Finals. Capela was the rookie, eager to learn and find his place within the team.

He saw how Howard had developed an effective offensive game based heavily on the pick-and-roll. Working in tandem with Harden, it was almost like having a cheat code. The play frequently resulted in a Howard alley-oop or an open jump shot for Harden.

“He’s a beast,” Capela said, recalling his time learning from Howard. “I really felt like he was so dominating.”

Howard took Capela under his wing.

“Most of the things he [taught me] were really in practice,” Capela said. “He practices really hard. He hates whenever an offensive rebound goes over your head. He went hard at me on post-ups and stuff like that. He always had strong reactions to my play.”

The 2015-16 season ultimately ended in disappointment, as the Rockets lost in the first round of the playoffs. Howard decided to sign with the Hawks in free agency. Entering the 2016-17 season, Capela would finally get his chance to be the starting center for the Houston Rockets. 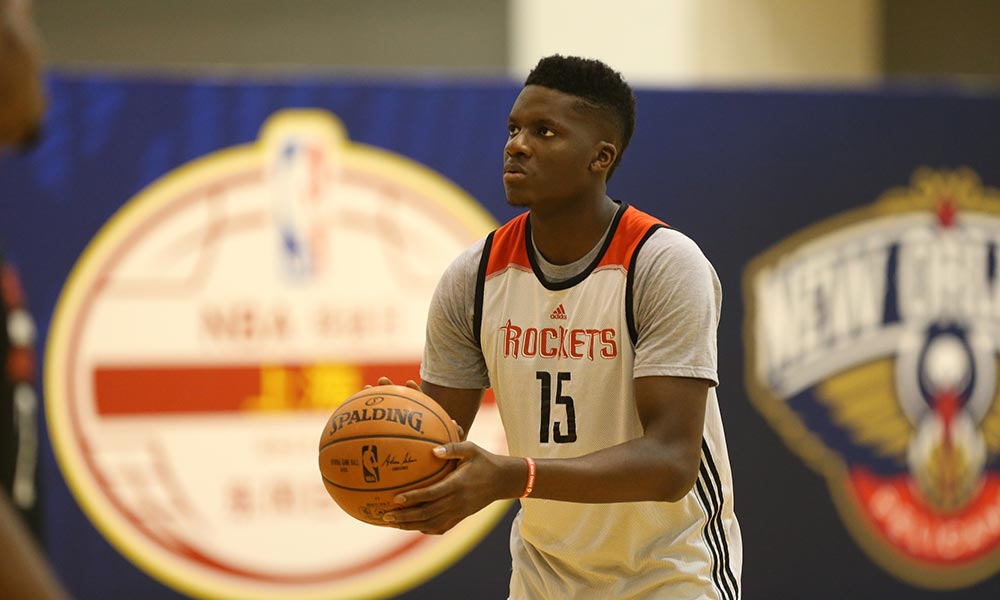 The Rockets have had three Hall-of-Fame centers in the franchise’s history. Beginning with Moses Malone in 1972, the torch was then passed to Hakeem Olajuwon in 1984. Yao Ming dominated from 2002-2011. Throw in Dwight Howard’s three-year tenure, and you have three NBA championships and 40 combined All-Star appearances between the four centers.

To say Capela had big shoes to fill entering the 2016-17 season is an understatement. Capela is aware of the Rockets’ big man legacy.

“I feel really proud,” Capela said. “I don’t just want to be here for a year, but for many years. The difference between these centers and me right now is that they spent almost their whole careers here and I’m just beginning. I wish to have a real impact on this franchise.”

A former international star himself, Olajuwon frequently checks in with Capela to offer advice and encouragement.

“Whenever he’s at the games, most of the time after, he comes to the locker room to talk to me. He’s saying stuff to push me,” Capela said.

Among other things, Olajuwon has been showing Capela how to improve his hook shot. While Capela may never master the “Dream Shake” (then again, who other than Olajuwon has?), Capela feels his skills have greatly developed this season. He averaged a career-best stat line of 12.6 points, 8.1 rebounds, and 1.2 blocks per game.

Capela made headlines earlier this season when he showed off his pipes for a fun Rockets segment.

Sure, he’s not exactly American Idol material, and he most certainly shouldn’t quit his day job, but (most of) Capela’s teammates loved it. According to Capela, he’s not the only “musician” on the Rockets. Walk into the weight room or locker room and there’s a good chance you’ll find  Harden rapping to a Rick Ross or Lil Wayne song.

“He knows all of the lyrics,” Capela said. “He always plays the music, maybe that’s why. We have speakers hanging on the walls so he just plays whatever he wants.”

Capela said that one of Harden’s favorite songs is “Wayback” by Travis Scott and Kid Cudi. The widely popular song has a catchy refrain that goes, “I need fake [people] to get way back, James Harden with the range on me… way back.”

“He plays that a lot,” Capela said bursting out laughing. “He likes to rap the chorus!”

While the Rockets enjoy listening to Harden rapping about himself off the court, it’s his play on it that really has them singing his praises. Capela and Harden have developed a symbiotic relationship, similar to what Howard and Harden used to have. Using this pick-and-roll blueprint, Capela and Harden led the league in alley-oops this season. “As everybody can see, he makes everything way easier for the team,” Capela said. “He’s just everything. He’s the main piece, he’s our number one. Of course he should be the MVP.”

When asked if he has considered copying Harden’s facial style, Capela responded, “Me? Hell no. That’s way too much hair.” 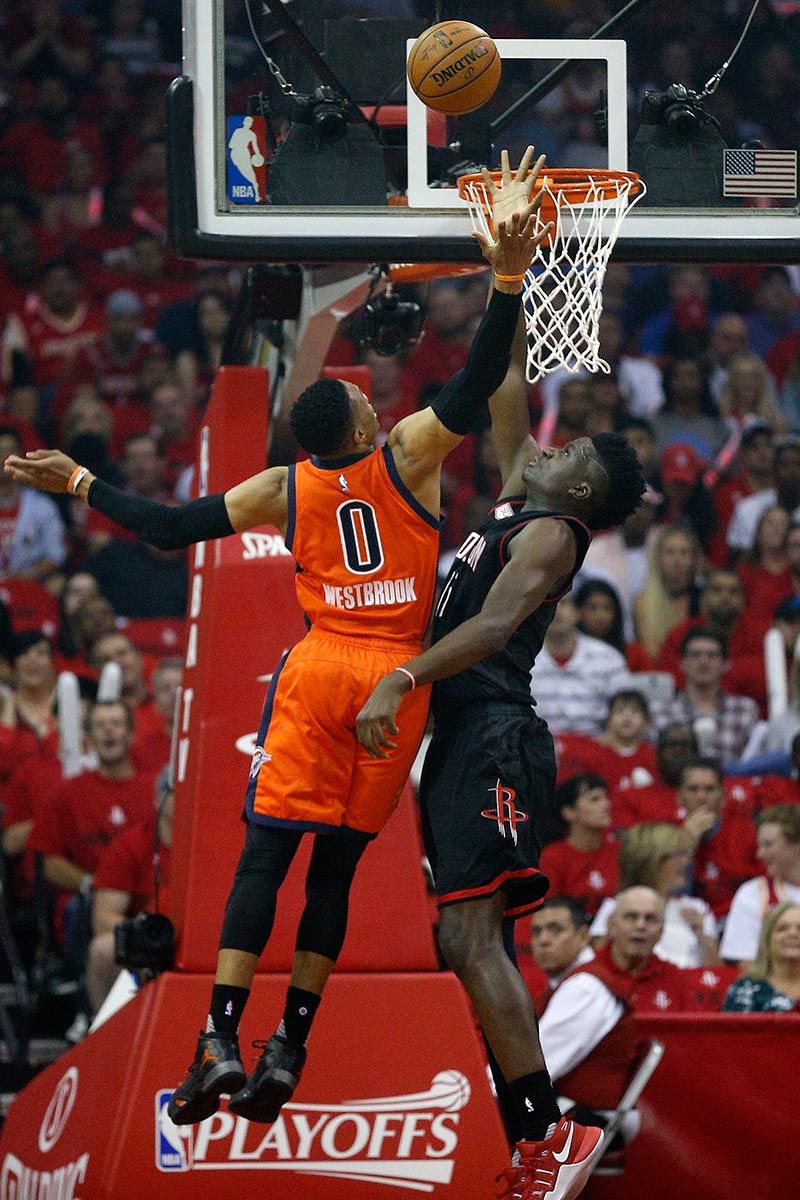 Capela and the Rockets dominated in their first-round playoff series against the Oklahoma City Thunder. With the combination of Capela’s high-flying alley-oops and the Rockets’ 3-point shooting prowess, the team has the talent to make it to the NBA Finals.

Capela’s career has taken off like a rocket. From a welfare orphan in Switzerland, to a teenager in France, to a starting center on an NBA playoff team, Capela has continuously persevered.

If defenders look up, maybe they’ll catch him flying by. Then they should cover their ears because, make no mistake, that boom is coming.