It’s been a week since the Lakeland Magic took home its first championship in franchise history. Since then (and even before), NBA G League players have been making an impact in the NBA. Here are six players that have been shining lately.

Porter Jr. quickly established himself as not only one of the premiere scorers in the G League, but as one of its top overall playmakers, too. He jumpstarted the season with a 25-point, four-assist outing, going on to average 26.3 PTS, 7.0 AST, and 4.8 REB in his first four games. Porter Jr. notched the league’s first triple-double of the season on Feb. 25 against the Erie BayHawks, scoring 27 points, dishing out 14 assists, and grabbing 11 rebounds. He finished the season as the league’s top scorer and also led in assists per-game, averaging 24.1 PTS and 7.2 AST, as well as 6.5 REB in 15 total games. 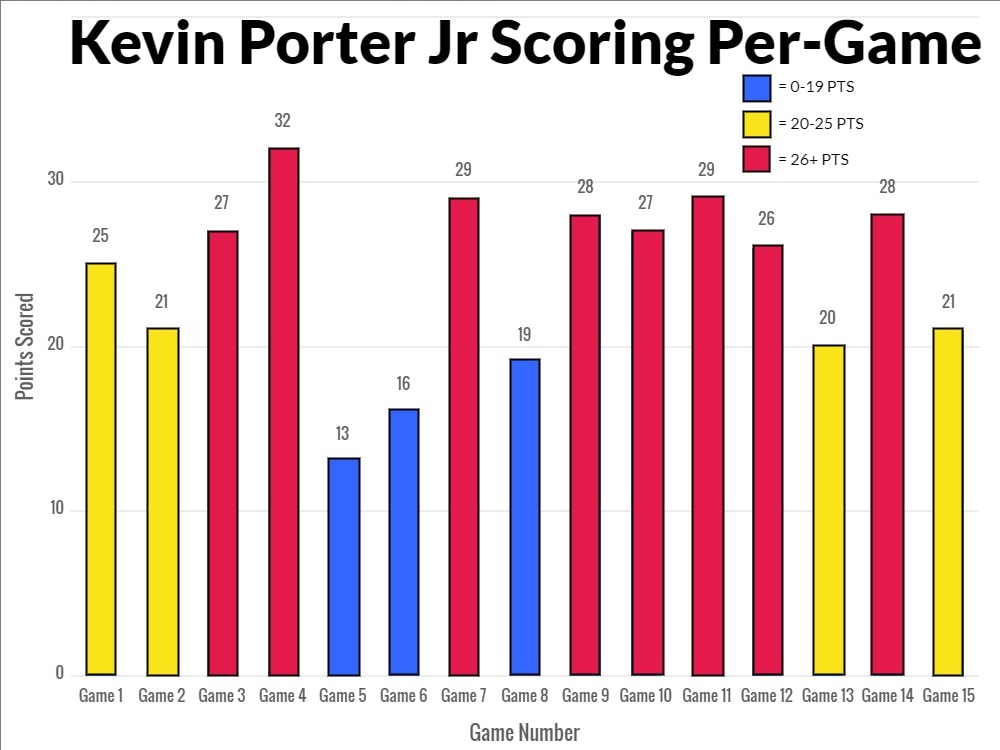 It’s hard to say that his early success with the Rockets wasn’t to be expected. In his first five games with Houston since being recalled on March 8, Porter Jr. has averaged 19.6 PTS, 8.0 AST, and 3.6 REB while shooting 43.6% from the field. He recorded his first double-double in the NBA too, scoring 13 points to go along with 10 assists in a 125-105 loss to the Sacramento Kings on March 11. It was his first game with Houston. Quite the impression from an NBA G League MVP candidate.

Pokusevski had flashes of what basketball’s present-day seven-footer looks like this G League season. Not only did he have 6+ rebounds in eight of 11 games, he also had six games of at least five assists. Some of those passes, including the two below, were good enough to be given the nickname “Point Guard Poku.” He was second on the team in assists per-game, averaging 4.0 for the season.

still wondering how @aleksejpokusevs did this

Though he didn’t shoot the ball particularly well (31.2% FG, 27% 3PT), Pokusevski was given the green light from deep for the Blue, and continues to for the Thunder so far. He’s averaging 5.5 3PA in four games since rejoining the team on March 5. In his third game back, Pokusevski went 5-8 from three-point distance, setting a new career-high in makes (previous was two) and attempts (previous was six), while scoring a career-high 24 points and tallied his first double-double by grabbing 10 rebounds.

Here’s a quick list of players that averaged at least 18 points and 12 rebounds per-game in the G League:

Brown was practically a walking double-double (he had 11), averaging 18.5 points and 13.5 rebounds per-game in 14 contests and had six games of 15+ rebounds. His dominance defensively inside the paint ranked him sixth-best in the league amongst centers in opponent’s points in the paint per-game (25.4), categorized by centers with 10+ games played and 20+ minutes played per-game.

His play in the G League has transitioned nicely so far since rejoining the Thunder on March 6. In four games played, Brown has already had a pair of 10+ rebound games, set a new career-high in points in each game, and recorded his first career double-double on Tuesday, scoring 20 points, grabbing 16 rebounds, and even blocking five shots. 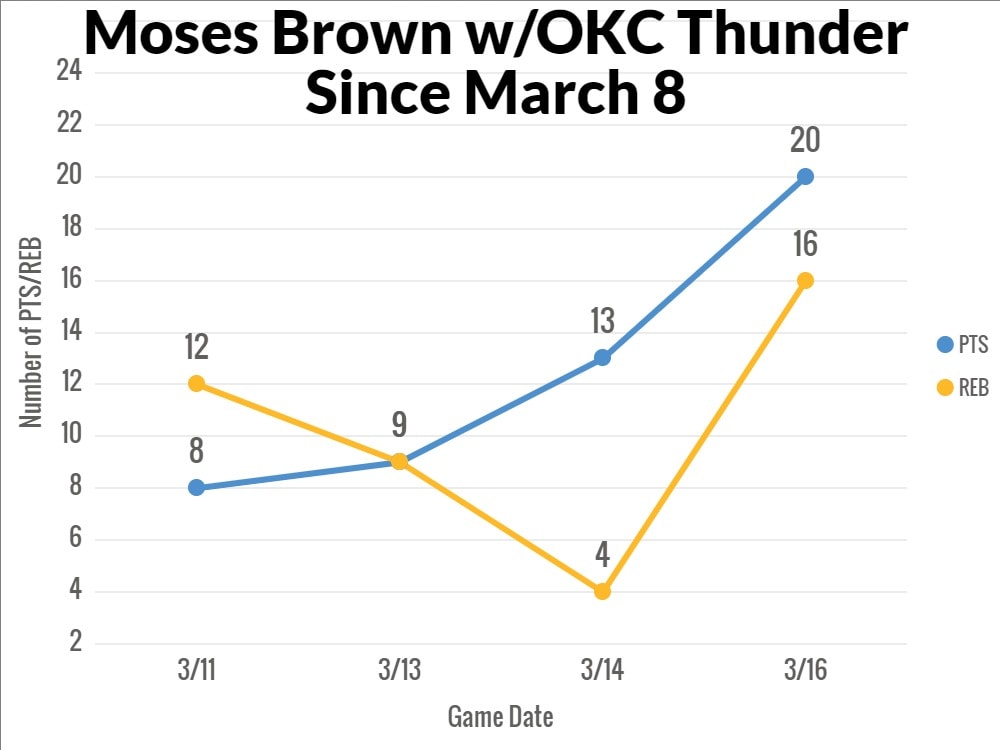 Poole had proven last season as a rookie with Golden State that he had the potential to be a scorer. He averaged 8.8 points per-game in 57 games (14 starts), and went on a solid streak throughout February and the beginning of March 2020, scoring 10+ points in 12 of 13 games.

We all know what happened next.

After spending the beginning of this NBA season with Golden State, Poole came to Santa Cruz and shined. He finished the G League season as second-best in scoring (22.4 PTS). His overall shooting percentages either got better or hovered around the same during his time in the G League. Here’s how those numbers looked for him last year, the beginning of this year, during the G League season, and now in five games with Golden State since returning on March 1. 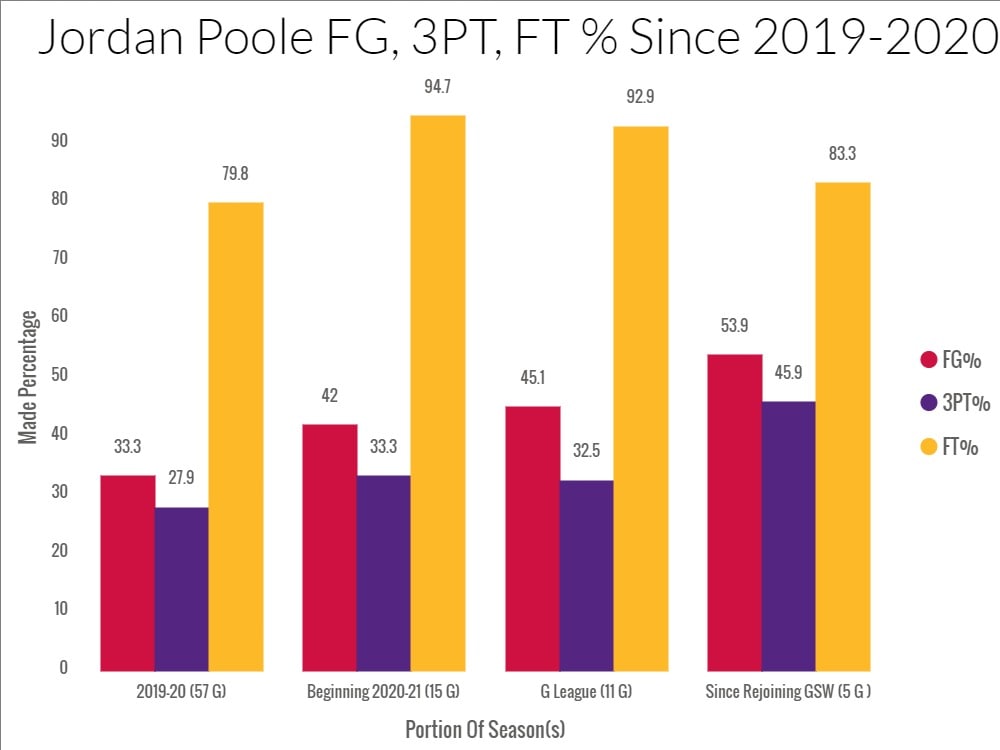 The steady increase in overall field goal percentage for Poole is promising, especially if he’s going to be part of a Golden State Warriors team that is notorious for being able to shoot the lights out of a gym. In his five games with the Warriors, he’s averaged 19 points and has shot 7.4 three’s per-game.

If you’re in the market for a highlight reel, there’s a good chance Martin Jr. can provide one.

Martin Jr. had a double-double in eight of his 10 games played in the G League this year, averaging 17.5 points and 11.4 rebounds per-game. He also was tied for seventh in blocks, swatting an average of 1.9 shots per-game.

In five games since returning to the Houston Rockets, Martin Jr. has averaged 13.8 points, 7.4 rebounds, 1.4 blocks, and one big dunk on Atlanta Hawks forward John Collins.

.@kj__martin made a poster last night

Mannion’s scoring ability mixed with his court vision helped him rank ninth in the league in scoring (19.3 PTS) and tied-second in assists per-game (6.9) in just nine games played. He tallied a pair of double-doubles in the G League and had six games of 20+ points.

Since rejoining Golden State, the rookie has averaged just over 20 minutes per-game. In his first six games of the season with the Warriors, he hadn’t surpassed 10 minutes on the court in a contest. He’s made good use of his time on the court, scoring a career-high nine points on a career-best 3-5 from 3PT in his first game back on March 4. In two of the next three games, Mannion scored 10 points. He’s averaged 7.8 points and 3.6 assists per-game since leaving the G League’s single site.