It was one thing to fall to the second round of the 2014 Draft and play limited minutes during his rookie season on a deep Grizzlies team… then, two weeks into his second season, get traded to the Heat.

Miami was a good fit for the Southern kid from Memphis. The toughest blows came just over three months later, when the Heat traded him to the Pelicans and New Orleans waived him the very next day.

“There was a certain moment when I was almost in tears thinking about, ‘Will I ever be in the NBA again?'” Stokes said at the NBA D-League Finals two months later. “To be able to persevere through that, it means a lot to me.”

Stokes may not be an NBA player at the moment, but he’s on the short list of the best players outside of it. That much was made clear when the NBA Development League’s 19 head coaches voted him Most Valuable Player after he starred for the Sioux Falls Skyforce for much of 2015-16.

Wednesday night in Sioux Falls, he celebrated an NBA D-League championship as the Finals MVP, as well. He averaged 19.0 points and 9.0 rebounds in the three-game series, delivering 25 points (11/13 FG) and 12 rebounds in the Game 3 clincher.

The season-stamping MVP Awards almost weren’t in the cards for Stokes. In the nine days between being released by the Pelicans and being acquired by the Skyforce — the Heat’s minor-league affiliate — Stokes weighed offers overseas and heard from several teams that he was “high on their board.”

He didn’t take that as a compliment. “I thought I was just a clear-cut NBA player,” Stokes said, “so that kind of hurts a guy just turning 22 years old.”

He headed northwest to South Dakota with a return trip to Memphis, Miami, New Orleans or any other NBA city on his mind. But while he had fallen out of the Association, Stokes landed back into one of basketball’s top organizations.

The Skyforce reeled off a 40-10 regular-season record and Stokes shouldered much of the offensive load, averaging 20.6 points while shooting a league-leading 67% from the floor. (He’d played much of the season on the Skyforce as an assignment player from the Heat already after playing 23 games for the Iowa Energy, the Grizzlies’ affiliate, last season.)

The former Tennessee standout is used to dominating down low. It’s the way head coach Dan Craig allowed him to showcase the rest of his game that helped Stokes move closer to his goal.

“Coach D.C. is one of the first coaches to ever really trust me as far as the plays I can make outside of the post. I’m a very efficient player in the post, but I’m just an efficient player, period. I really have a smart mindset and a smart IQ and I’m really learning the game through Coach Craig. He made me a very elite film guy; I feel like a coach when I’m watching film now.”

Instead of watching film and sitting on the bench in Miami, Stokes hits the court with the Skyforce, who run virtually the same system as Erik Spoelstra’s squad. Stokes said he studied Chris Bosh closely and gradually took on parts of his role in the offense.

The 22-year-old has set himself up to cash in this summer, whether in Miami or elsewhere. He said he plans to stash his hardware back home in Memphis, take a week or two off to celebrate a redemptive season, and get back into the film room to “break guys’ games down to a science.”

“I look at guys like David West and Paul Millsap. That’s the range of how I feel about my game and what I feel like I can bring as far as potential.” 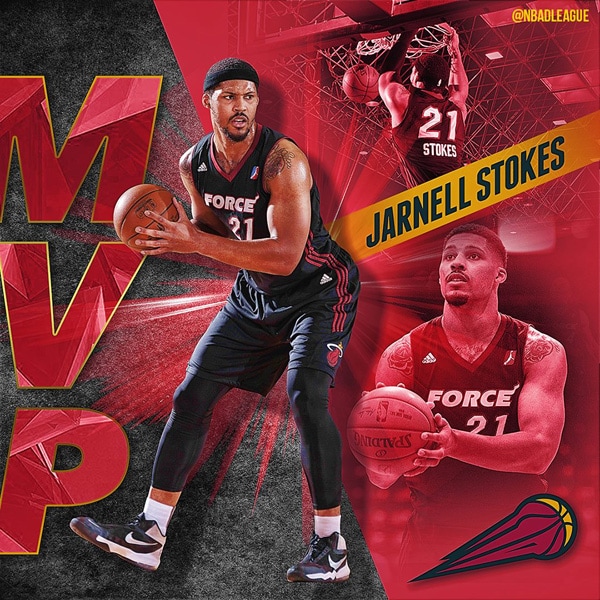