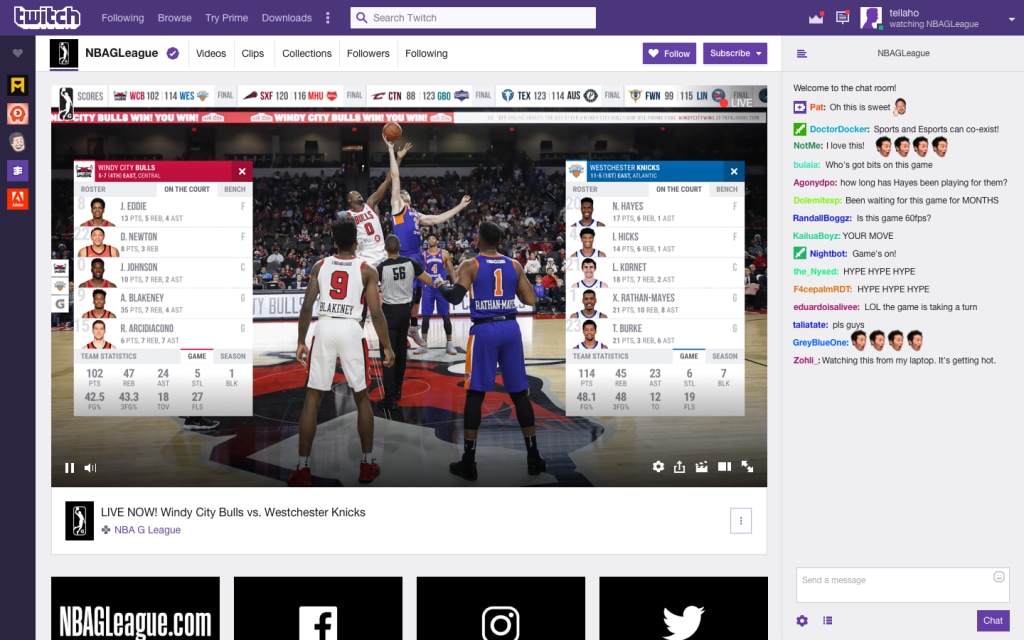 During the 2017-18 regular season, basketball fans can expect up to six NBA G League games to stream live on Twitch each week at twitch.tv/nbagleague.  After each live broadcast, these games will be available on demand.

The partnership expands NBA G League game distribution and aims to ambitiously innovate the digital presentation of basketball.  In addition to the main broadcast, this partnership will feature co-streaming with select Twitch personalities and basketball fans.  Co-streaming allows a creator to share another channel’s video feed, but with their own commentary and community, resulting in a more personalized, social experience that includes the ability for viewers to chat with commentators during the game.  At launch, GoldGlove and more than a dozen other top personalities on Twitch will take part in the co-streaming initiative.

Additionally, this partnership will introduce interactive functionality for Twitch viewers in the form of a channel overlay that provides easy access to a wide range of stats and the ability to accrue loyalty points.

“Our deal with Twitch will be groundbreaking,” said NBA G League President Malcolm Turner.  “By leveraging fan commentary, new technology and a passionate community, Twitch elevates video in a unique, engaging way that resonates with young viewers.  We look forward to collaborating with their team to create something truly special for basketball fans.”

“From day one, the NBA team got what Twitch is all about.  We aren’t a traditional sports experience on TV; we are much more,” said Michael Aragon, Senior Vice President of Content, Twitch.  “From our broadcasters to our engaged community to our interactive product that brings everyone together, collaborating with their team is going to bring a unique experience to basketball fans worldwide.  We are thrilled to be working with the NBA G League and look forward to seeing the impact of social video on mainstream sports.”

As a research and development arm of the NBA, the NBA G League tests rules, technological innovations and equipment in an effort to elevate the game.  This season, the league played with four-person referee crews during the month of November, while testing rules such as the innovative Coach’s Challenge and a two-minute overtime period.  During the league’s 17-year history, it has experimented with the international goaltending rule, away-from-the-play fouls and in-game flopping penalties, among other rules.

About the NBA G League

The NBA’s official minor league, the NBA G League prepares players, coaches, officials, trainers and front-office staff for the NBA while acting as the league’s research and development laboratory. Featuring 26 teams with direct affiliations with NBA franchises for the 2017-18 season, the league offers elite professional basketball at an affordable price in a fun, family-friendly atmosphere. An all-time-high 44 percent of all NBA players at the end of the 2016-17 season boasted NBA G League experience.  In fostering the league’s connection to the community, its teams, players and staff promote health and wellness, support local needs and interests, and assist in educational development through NBA Cares programs.  NBA G League games are available on ESPN’s family of networks and NBA TV.

Twitch is the world’s leading social video service and community for gamers. Each day, millions of community members gather to watch, talk, and chat about shared interests. Twitch’s video service is the backbone of both live and on-demand distribution for all types of content, including the entire video game ecosystem, the creative arts, vlogging (IRL), and more. Twitch also runs TwitchCon, an annual convention for celebrating the Twitch community. For more information about Twitch, visit our Press Center, Twitter feed (#Twitch), and Blog.