When Iowa Energy head coach Bob Donewald told Nicki Gross that she’d been promoted to assistant coach, Gross thought the team would send a press release and that would be it.

Within two days of that release, her name was everywhere from ESPN, Fox Sports and Yahoo! to thousands of Twitter feeds across the country.

But what the basketball world currently views as another sign of progress — the hiring of the NBA Development League’s third-ever female coach — Gross views as simply the natural next step in her career.

NBADLeague.com talked to the 26-year-old New Jersey native about her rapid rise, women in coaching, and life as a video coordinator.

How did you find out you’d be joining the Energy’s coaching staff? What was your reaction — who did you tell first?

I’d been talking to my coach [Bob Donewald] about what my responsibilities would be for next year and it kind of just evolved. I knew before it hit the media. I told my parents first. I told my brother. And I told two of my closest friends from home. I just kind of texted people, like, “Hey, I’m gonna be an assistant next year.” And they were like, “OK, cool.”

And then when it hit Twitter, I was on the West Coast. It was about 7:00 in the morning when it came out. I was just walking around the park with my coffee and all of a sudden people started texting my phone. That was kind of a different morning. But it was cool; it was fun. I actually got to catch up with people I hadn’t talked to in a little bit. I had some people make fun of me because I didn’t tell them and they had to read it on Twitter.

Did you think it would be a big deal?

I’m gonna be honest — I didn’t. In my mind, it was a great opportunity. I’m very thankful for the Energy and the Grizzlies organization for believing in me. But in my mind, I had always just kept going. “Keep doing your role; it’s just basketball.” I didn’t really see a gender difference. I’d been on awesome staffs where they didn’t even point it out. I was just one of the staff.

So the news came out and I found out I was going be the only female one [in the NBA D-League]. When they said it was going to be a press release, I said, “Cool. Sounds good.” I definitely hope it gets to the point where it’s not really news anymore. You have Becky Hammon and Nancy Lieberman as assistants in the NBA. Hopefully it does get to the point where people just see us as coaches. But for the time being, it is an exciting time. 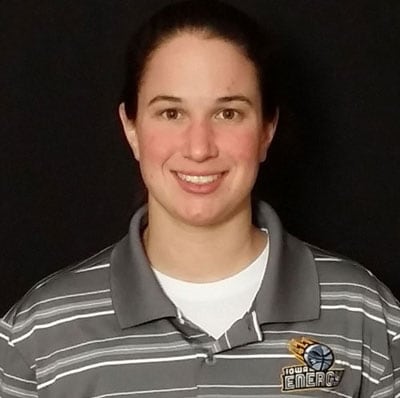 When did you first think becoming a professional basketball coach was a realistic possibility?

That’s what I was working toward. That’s what I wanted to do, so that’s why I got into it. But my visions were all just short-term, like, “Let me help the team that I’m working for the best that I can.” So even last year, as I was a video coordinator, I wasn’t even thinking like, “Hey, I could be an assistant next year.” Or, “I wonder when I get to be an assistant.” I was just like, “Let’s get this film ready so we can win this next game.” Or, “What do the assistants need so we can help these players get to the NBA?”

What did the Spurs’ hiring of Becky Hammon last year do for that goal?

Once she was hired as an assistant, I was already with Iowa, so I had already done the year with Bakersfield. I started in grad school as a grad manager for the men’s team at Monmouth. So I was always on the path. I was good friends with Natalie Nakase; she was a video coordinator for the Clippers. My first NBA Summer League in Las Vegas, we had worked together. So I knew there was a way to get in.

Once Becky Hammon got hired, it was like, “OK, maybe it won’t be news anymore.” She’s done a great job with the Spurs, and seeing her at Summer League was pretty cool when she took the head job and won it. That was awesome. She led the way. Nancy Lieberman had started off when she was in the D-League as a head coach and now she’s on an NBA bench (as a Sacramento Kings assistant). It definitely reaffirms that it’s possible. People are accepting of it, and hopefully it gets to the point where everyone can see that basketball is basketball.

What was life as an NBA D-League video coordinator like? What types of information were you delivering to coaches and when?

I kind of lived in the film room. You get to watch so much basketball. You pick up so much from just seeing it — the coaches meetings, just watching all these edit tapes. In the D-League, it’s pretty cool because my first year I was the assistant and there was a head video coordinator. So it was just two of us doing most of the video. And then last year, I was kind of on my own. I was the head video coordinator and there was an intern that helped us out.

I worked really closely with the assistant coaches in terms of what they needed for their prep to deliver a scouting report to the teams. And then postgame, I worked closely with Coach Donewald and a couple of the assistants on what we wanted to present to the team. Sometimes they would be like, “Hey, we need all the times *this* happened in the game,” or, “Let’s check how we covered *this* pick-and-roll. So I would go through and cut that up. It’s a lot of time that you have to put into it, but its definitely rewarding. 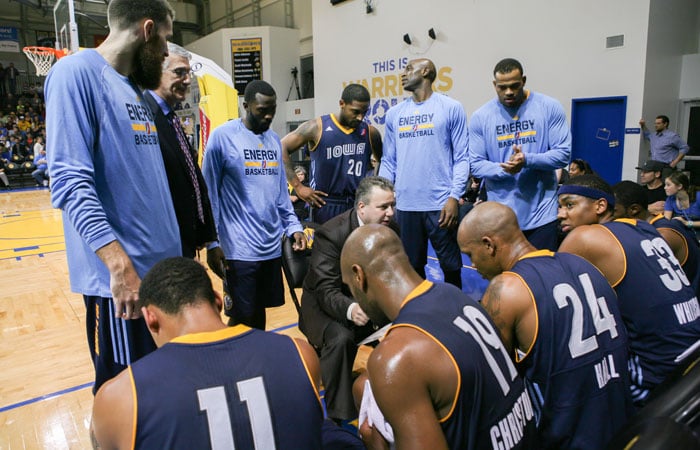 I’ve heard that you’re a basketball junkie, which a lot of video coordinators are. How many late nights were there during the season?

There’s plenty. I guess it’s a good thing I don’t really like to sleep, and I don’t really need to. When we’re on the road, I was usually hanging out down by the lobby cutting up film down there. If you have enough days in between and you’re really efficient with your work, you can relax a little bit.

Our coaching staff really worked well with knowing how to manage all of our scouts and our time together in terms of what we needed to have to prep so we weren’t cramming it in. I would say the majority of nights were pretty late. And then I like to wake up early and get more work done. It’s definitely a crunched season, fast-paced, but that’s what makes it fun.

How do you expect your role with the team to change next season?

It’ll be an exciting transition, going from mostly video to doing a lot more stuff with the players on the court. That’s the biggest transition, even though I did help out on the court last year. During practice, I would be on the court helping out with a lot of the extra training guys wanted to get in. A big change will be helping out more in-depth with the scouts, preparing for each game. I saw a lot of it last year in how we work as a staff doing the video for it.

Did you feel any differently in Iowa as far as how the players treated you or viewed you? Do you have any concerns about that?

In terms of staff, I’ve been on phenomenal staffs that didn’t pay attention, both at Bakersfield and Iowa. I was part of them. With the players, once they know you’re there to help them, you’re just one of the staff. They understand and they’re ready to get going. We’re there to help them win games, to help them develop to get to the NBA. That’s our focus.

From my experience, they’re accepting of that. They don’t really see you as, “Oh, that’s the woman staff member.” It’s, “Hey, that’s our video coordinator,” or, “Hey, that’s our assistant.” That’s been my experience so far, so I don’t see that changing much at all. Because I let them know that my goal is to help them, my goal is to help the team just like every other assistant and our head coach and the video coordinators.

What do you think needs to happen for more women to get opportunities as coaches in the NBA or D-League? At what point do you think this can become common?

I haven’t talked to anyone, but I hope there are more women out there that want to do that for their job. I’m for sure OK with being in that role and comfortable if people want to look at me and see that there is a way — that they can basically do what they want. If that’s what they want to do, they just need to be confident. Becky Hammon is a great role model, Nancy [Lieberman] is a great role model in that sense.