He’s proven it over two seasons in the NBA Development League. He’s heard it from coaches and scouts and even stated it himself.

In signing Wednesday’s contract with the Sacramento Kings, Curry has landed securely at the next level for the first time in his professional career. The news comes three days after the minor-league star wrapped up a Summer League audition in which he led the 67-game Las Vegas event in scoring and said of the NBA, “I just think that’s where I should be.”

My NBA Journey: Seth Curry, In His Own Words

Here’s how he got there — a journey that has taken him to nine pro teams over two long years:

Summer 2013: Signed and Waived by Golden State After Going Undrafted

Seth Curry was not among the 60 names called at the 2013 NBA Draft, despite coming off a senior season in which he led Duke in scoring and reached the Elite Eight.

His first NBA stop was a reunion with Stephen, his older brother by two and a half years, on a non-guaranteed deal signed in August. They traveled together for the NBA Global Games in Beijing, but the big-league Warriors waived Seth in October.

He immediately established himself as the Santa Cruz Warriors’ version of Steph, scoring a franchise-record 36 points in his pro debut. Klay Thompson’s older brother, Mychel, even joined him to form the minor-league Splash Brothers.

Curry’s first two stints in the Association lasted a combined 23 days. He made his NBA debut with Memphis on Jan. 5, 2014, playing four minutes without registering a statistic, and was waived later that night.

Three months later, he got another cup of coffee with the Cavaliers, scoring his first NBA points on a three-pointer on March 22, 2014.

The storylines by April seemed too good to be true. Not only were the Curry brothers simultaneously starring for Warriors teams across the bay, but Seth made his pro playoff debut on “Splash Brothers Night” in the Bay Area and National Siblings Day across the country.

Then Curry showed that the clutch gene runs in the family. Entering into a zone normally reserved for Steph, Seth poured in 44 points on 15-of-20 shooting — 9-of-14 from three-point range — to lead Santa Cruz to a comeback victory. The “Sea Dubs” went on to lose to the Fort Wayne Mad Ants in the 2014 NBA Development League Finals.

July 2014: Summer League with the Magic and Suns

Curry donned two more new uniforms at the Orlando and Las Vegas Summer Leagues a year ago — a stretch highlighted by a 26-points-in-22-minutes eruption with the Suns.

Orlando maneuvered to stash Curry on its new single affiliate in Erie by signing him on Sept. 29, acquiring his NBA D-League rights from Santa Cruz in an Oct. 7 trade, waiving him on Oct. 25 and acquiring him as an “affiliate player” with the BayHawks five days later.

He caught fire almost from the moment the 2014-15 season started, peaking over a two-week stretch between December and January when he averaged 31.6 points on 59% shooting in seven games.

MORE: Seth Curry is Lighting Up the NBA D-League

Despite his All-Star campaign in the Development League, Curry once again saw his latest NBA stint end after just 10 days. He appeared in two games and played a total of eight minutes as a Sun, missing all three of his shot attempts. 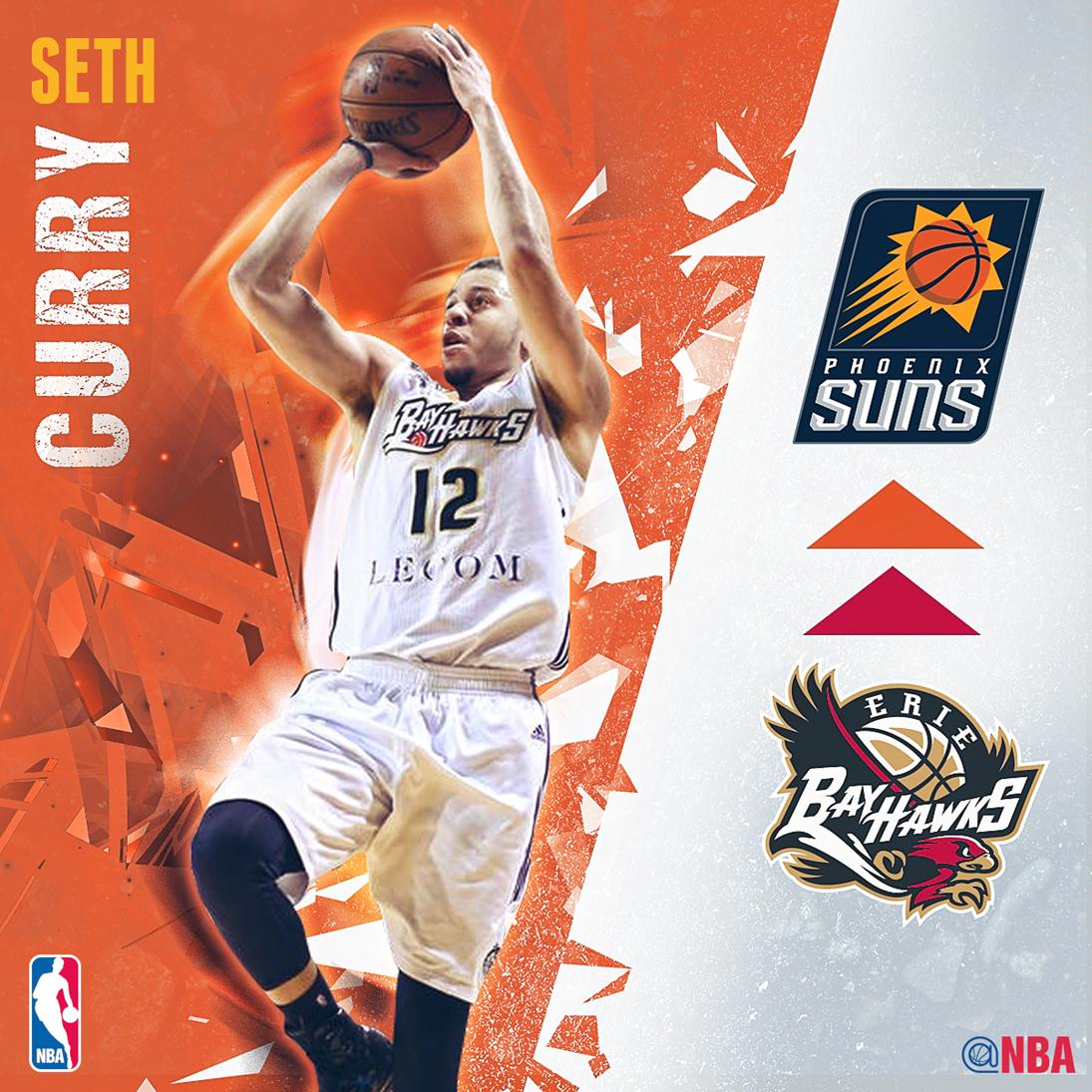 Though their seasons played out on opposite ends of the country this time around, the parallels between the Curry brothers became downright eerie in Year 2.

Both finished the season averaging 23.8 points per game and both led their respective leagues in three-pointers made and free throw percentage.

The full tale of the tape:

At a time when he needed it most, Curry’s jump shot — the skill that he practically inherited from his father — abandoned him. That actually made his performance in Las Vegas all the more impressive to seal his trip to the NBA.

Despite shooting just 8-of-36 (22%) from deep, Curry averaged 24.3 points, led the New Orleans Pelicans to a 5-1 record and was as active on the other end as ever, ranking second with 3.2 steals per game.

About 90 miles separate the Kings’ Sleep Train Arena from the Warriors’ Oracle Arena, but Curry’s career will forever be tied to his superstar sibling and his father, a 16-year NBA veteran.

Still, California’s other Curry will look to “make my own path,” he said last week. It’s off to a long, winding start.