Below are the current NBA G League head coaches. Stay tuned for more updates prior to the 2021-22 season.

Hewitt enters his first year as head coach of Agua Caliente after spending the last four seasons as a Clippers player evaluator, replacing Brian Adams (now an assistant coach for the Philadelphia 76ers). His 18 total years as a head coach include time with George Mason University (2011-15), Georgia Tech (2000-11), and Siena College (1997-2000).

Georgia Tech had five NCAA Tournament appearances under Hewitt and appeared in the national championship game in 2004. A former ACC Coach of the Year (2000-2001), Hewitt stands as the third-winningest coach in Georgia Tech history (190-162).

Nielsen becomes the seventh head coach in franchise history after spending last season as an assistant for Austin. Prior to last season, Nielsen spent four seasons (2015-2019) as an assistant for the Perth Wildcats of the NBL, in which he won three championships. The Australia native was a player development assistant during the 2014-15 season while also serving as an assistant coach with San Antonio’s summer league team from 2014-19.

As a player, Nielsen was named the 2004 NBL MVP and won two championships with the Sydney Kings. After his nine seasons with the Kings, Nielsen moved to Europe and played another nine years total in Lithuania, Greece, and Spain. Reinking, 47, heads into his fifth season as Canton’s head coach with a 102-91 record. He joined the Charge as an assistant under head coach Steve Hetzel for the 2013-14 season with a focus on player development and opposition scouting. After Hetzel’s NBA Call-Up, he was retained under new head coach Jordi Fernandez as an assistant the next two seasons, while adding game-planning and game personnel to his responsibilities.

A native of Galion, OH, Reinking graduated from Kent State University in 1996 after a four-year playing career with the Golden Flashes. He currently ranks in the program’s career top ten in scoring (1,456, 10th) and three-point field goals made (184, 7th). As a captain his senior season, Reinking was named Second-Team All-MAC after playing in all 27 games and averaging 18.7 points on .445 shooting with 3.7 rebounds, 3.1 assists, and 0.9 steals per game.

After starting his collegiate playing career at Cleveland State from 2004-06, Gansey finished at Ashland University (OH). He is a native of Olmsted Falls, OH. Gansey will serve as an assistant coach for the Hawks’ summer league team.

Connor Johnson was hired as the new head coach of the Delaware Blue Coats on June 18 after spending four seasons with the Philadelphia 76ers coaching staff, most recently as the team’s Director of Player Development and Coaching Administration from 2015-2017.

Prior to joining the 76ers organization, Johnson worked at Villanova, serving as a graduate assistant with the men’s basketball program under Jay Wright. Johnson played his college basketball at Amherst College in Massachusetts.

The 54-year-old Hankins brings vast coaching experience to Fort Wayne. He got started as a graduate assistant at Northwest Missouri State in 1991 after graduating from Northeastern State (OK) University in 1990. He next was an assistant coach at East Central High School in Tulsa, OK, for five years before going to Oral Roberts University as an assistant coach for 15 years, 12 of those as the top assistant.

The 19-year NBA veteran brings a wealth of experience and basketball knowledge with him to Grand Rapids, having appeared in 1,410 career games, the ninth most in NBA history. The sharp-shooting NBA Champion owns career averages of 13.4 points, 2.3 rebounds and 3.8 assists while connecting on 2,282 career three-pointers, the seventh most all-time. After wrapping up his prolific playing career in 2018, Terry spent the 2019-20 season as the Assistant General Manager for the G League’s Texas Legends and the 2020-21 season as an assistant coach with his alma mater Arizona Wildcats.

Surenkamp has been elevated to lead the Swarm after completing his third season with the Hornets – his second as the Head Video Coordinator. He joined the organization prior to the 2018 season as an Assistant Video Coordinator.

Before joining the Hornets, Surenkamp kicked off his career in professional basketball with the Brooklyn Nets (2017-18). His tenure with the Nets included head video coordinator duties for their NBA G League affiliate, the Long Island Nets.

Newton showcased his head coaching acumen as he took the helm of the 2021 Timberwolves Summer League team in Las Vegas, leading the group to a 4-1 finish. Prior to joining the Wolves, Newton served as an assistant video coordinator for the Sacramento Kings for three seasons. Prior to that, he was with the Houston Rockets for three seasons, spending one year each as a personnel scout, assistant video coordinator and basketball operations intern. 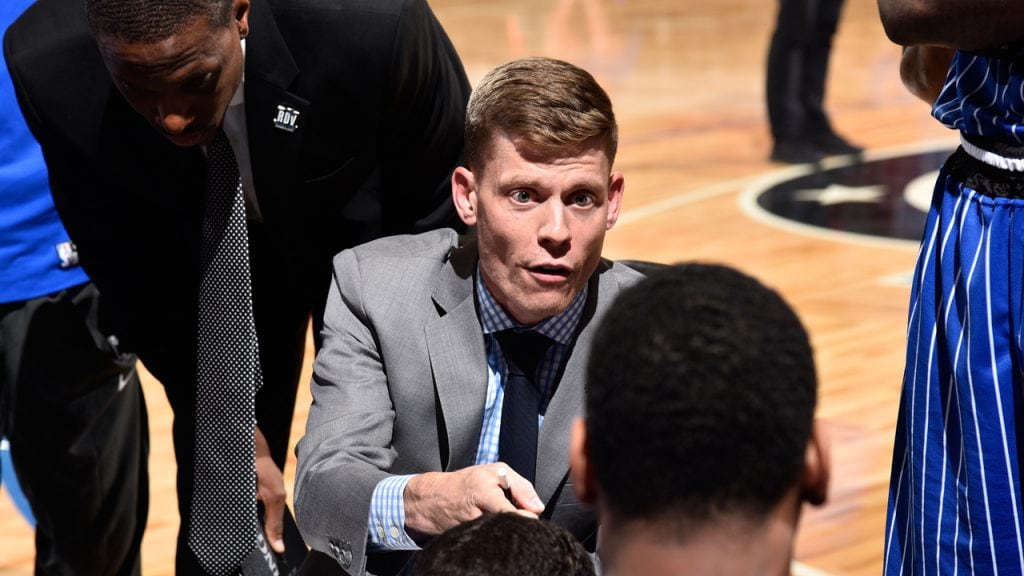 Barrer becomes the 2nd head coach in franchise history after spending the last four seasons as an assistant coach with the team.

Barrer has been on the bench as an assistant coach for every Lakeland Magic game in franchise history. In his four seasons coaching Lakeland under Stan Heath, the Magic were tied for the most regular season wins in the league and won the 2021 NBA G League championship.

Prior to joining the Lakeland Magic, Barrer served as an assistant coach with the Iowa Energy (now the Iowa Wolves, NBA G League affiliate of the Minnesota Timberwolves). Before joining the Energy, Barrer was an assistant coach at Bethel University and Truman State University and spent five years as the head coach of Assumption High School in Davenport, Iowa. Barrer began his career as Director of Basketball Operations at George Mason University during their 2006 Final Four run.

Caporn joins the Nets after spending the last seven seasons (2014-21) as head coach of Basketball Australia’s Centre of Excellence, the country’s leading player development program. He currently serves as an assistant coach for the Australian National Team, a position he has held since 2017, and will help lead the Boomers in the upcoming Tokyo Olympic Games.

The new head coach for the Memphis Hustle in 2019-20, March previously spent nine seasons in Memphis (2007-16), including two seasons as assistant coach/advance scout for the Grizzlies. He spent his first six seasons with the team in the video department, including time as director of basketball information and technologies. March also served as head coach of the Grizzlies’ summer league squad that went 5-0 and captured the championship at the 2015 Orlando Pro Summer League.

The coach returns to the Grizzlies organization after three years as an assistant coach with the Sacramento Kings (2016-19). March got his start in the NBA with the Phoenix Suns (2005-07) as assistant video coordinator.

Bakker is entering his sixth season as a member of Dwane Casey’s coaching staff, spending two years in Toronto and the past three years in Detroit. During his time in Toronto, Bakker assisted in the development of Pascal Siakam, Norm Powell, Fred Van Vleet, and Alfonso McKinnie. In Detroit, Bakker worked closely with Luke Kennard and Saddiq Bey on individual skill progression, while overseeing the development of all young players on the roster. Bakker’s knowledge of Casey’s offensive and defensive philosophy with the Pistons will provide a seamless transition for players moving between the Cruise and the Pistons.

Mutombo spent four seasons as an assistant coach with the Toronto Raptors.  He began his coaching career at his alma matter Metro State in 2011 as an assistant.  After one year, he joined the Denver Nuggets, where he served as the player development coordinator for the 2012-13 season, before being promoted to assistant coach and serving in that capacity for two seasons.  Prior to joining the Raptors, he was a member of the Austin Spurs as an assistant coach.

A native of the Democratic Republic of Congo, Mutombo developed his basketball skills while growing up in Belgium, and he later played under coach Mike Dunlap at Metro State in Denver. Mutombo spent six years playing professionally in Italy, Greece and the NBA G League. He played four seasons in the top league in Italy, one season for Trikala 2000 in Greece’s top league, and the 2009-10 season with Bakersfield in the NBA G League. Mutombo turned pro after a distinguished career at Metro State (1999-2003). He helped the Roadrunners win two NCAA Division II national championships (2000 and 2002) and was named second-team All-America in 2001 and first-team All-America in 2002. Mutombo ranks second in school history in career free throw percentage (.853), fifth in field goals made (571) and ninth in points (1,360). He was inducted into the Metro State Athletics Hall of Fame in February 2011.

During his time as assistant coach, the Vipers finished with a 34-16 record, ranking first in the Western Conference and Southwest Division. RGV also led in three different league categories; points (128.4), rebounds (56.2) and three pointers made (90) per game.

In addition to working on the staff in RGV, Abdelfattah has also served as an Assistant Coach for the Jordanian National team in 2018. Prior to RGV, Abdelfattah worked as an assistant coach at his alma mater St. Cloud State for four seasons, where he oversaw the player development program and led the recruiting efforts for the Huskies. Abdelfattah began his coaching career as a student assistant coach at St. Cloud State in 2010.

Peavy began his coaching career in the 2017-18 season as an assistant under Martin Schiller, the 2019-20 NBA G League Coach of the Year. As a member of Schiller’s staff, Peavy helped guide the Stars to two playoff berths and an improved winning percentage each season. He aided in the development of current Jazz players Tony Bradley, Jarrell Brantley, Juwan Morgan, Georges Niang, Royce O’Neale, Miye Oni, Rayjon Tucker, Nigel Williams-Goss and Justin Wright-Foreman while they appeared in games with the NBA G League franchise. Three players have earned GATORADE Call-Ups to the NBA during Peavy’s tenure with the team.

Prior to beginning his coaching career, Peavy played internationally for eight seasons in both Germany and Puerto Rico, including a stint as a member of the Puerto Rican National Team. 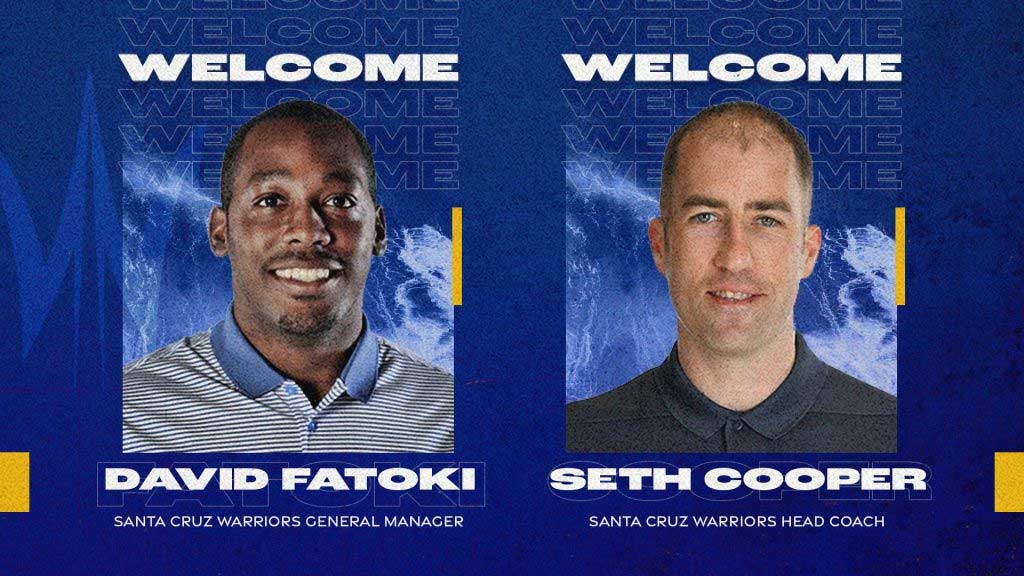 Cooper, who is entering his third season with the Warriors franchise, spent the past two seasons as a player development coach with Golden State. Prior to joining the Warriors, Cooper was an assistant coach at the University of Illinois at Chicago. Previously, he spent two years as the associate head coach for the Maine Red Claws, the G League affiliate of the Boston Celtics. During Cooper’s two seasons with the Celtics organization, the Red Claws won division titles both years and had a total of eight players sign NBA contracts.

As a player during the 2007-08 season, Powell put together one of the greatest statistical performances in Skyforce franchise history, appearing in 40 games (38 starts) while averaging 22.2 points, 6.0 rebounds and 3.0 assists per contest. His efforts earned him NBA G League MVP honors that season, becoming the first player in franchise history to earn a league MVP award. He capped that season by earning an NBA Call-Up to the Miami HEAT, where he ultimately signed for the remainder of the 2007-08 season.

Derrick Alston was named Head Coach of the Westchester Knicks in August of 2019, becoming the team’s 4th head coach in franchise history. Alston has spent the last four seasons with the Westchester Knicks as an assistant coach, helping guide the franchise to a 108-92 overall record. He also helped the team secure their first-ever playoff win during the 2018-19 season. Before his team with the Knicks, Alston was a Player Development Coach with the Houston Rockets for 3 seasons.