The NBA G League Finals presented by YouTube TV get underway on April 12, with the Rio Grande Valley Vipers squaring off against the Delaware Blue Coats in a best-of-3 series between the G League’s two highest-scoring teams to determine the league’s champion. Both teams won their way through a single-elimination bracket tournament within their respective Conference to reach the Finals, which can be watched on a variety of ESPN networks. 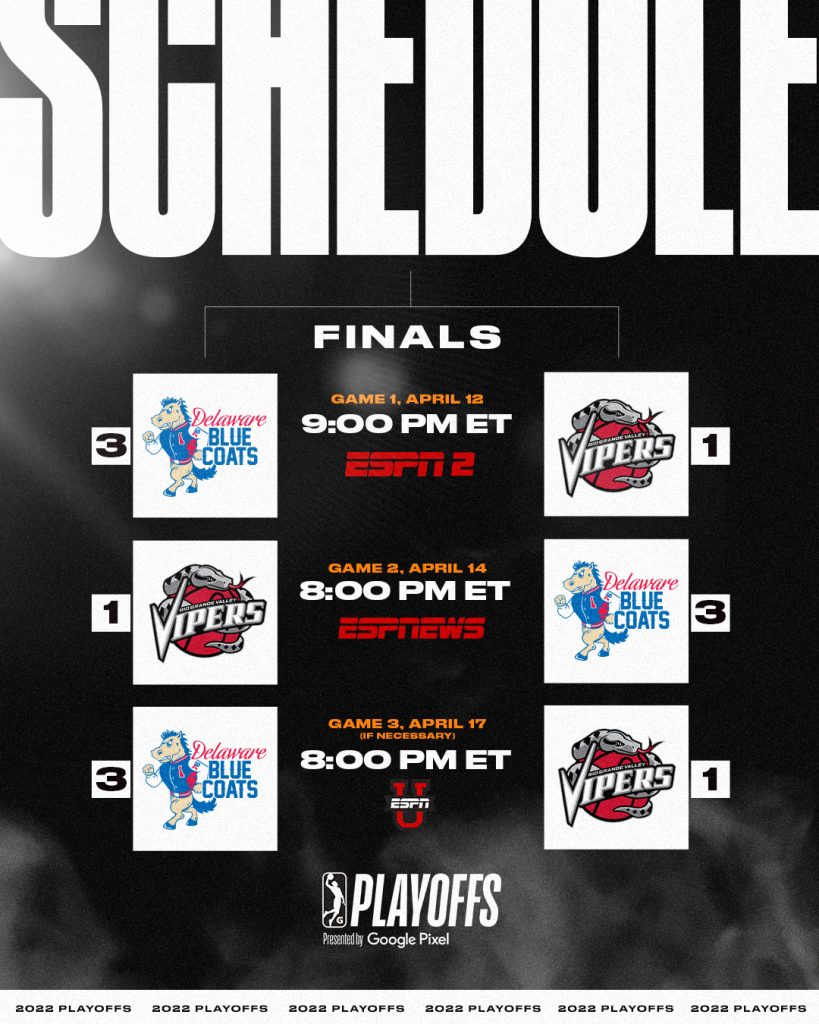 After starting the regular season 1-3, the Rio Grande Valley Vipers quickly won 10 of their next 11 games to vault up to the top spot in the Western Conference and never looked back. League MVP Trevelin Queen, a two-way player with the Houston Rockets, was a dynamic threat all season. The combo guard averaged a team-high 25.3 points per game and led the G League in steals (3.3 per game) while also averaging 6.7 rebounds and 5.2 assists and shooting 47.8% from the field. He also formed a talented backcourt with rookie Daishen Nix, whose stellar play on the Rockets’ other two-way contract eventually earned him a standard NBA contract. Nix averaged 20.6 points, 7.6 assists, and 2.1 steals per game across 18 games for Rio Grande Valley, but hadn’t played with the team since February 26 after earning his standard contract. With the Playoffs in full swing, however, the Rockets assigned him back to the Vipers for the stretch run, and the talented point guard picked up right where he left off. He scored 22 points and added 7 assists and 6 rebounds in the Western Conference Finals win over Agua Caliente, flashing the spectacular finishing abilities that earned him an NBA contract initially. With Nix back in the fold and Queen fully healthy after an injury that cost him some time late in the regular season, the Vipers look poised to once again ride their dynamic backcourt as far as they can.

Queen’s injury and Nix’s NBA stint allowed for numerous other contributors to step up for RGV. Marcus Foster played in 33 out of 34 games for the Vipers, finishing third on the team in scoring with 18.7 points per game and stepping into the point guard role flawlessly (7.6 assists per game) when Nix was called up to Houston. With Nix back in the fold, Foster has reverted back to an off-ball roll as a floor spacer. He finished off the Agua Caliente win with two clutch buckets to seal the game, the first being a pull-up triple to stretch the lead to seven with just under 90 seconds to go and the last being a dagger layup in the final seconds to break the press. The Vipers have embraced a quick-moving, fast-shooting approach, averaging a league-leading 42.3 3-point attempts per game in the regular season while operating at the fourth-fastest pace (104.83) in the G League and scoring more than any other team (124.5 points per game). In their two wins in the Playoffs so far, they’ve taken 94 total triples, outpacing their season average. Even big man Mfiondu Kabengele (17.5 PTS, 9.5 REB) is getting in on the act from deep, taking 12 total threes over the two playoff matchups after averaging 3.0 per game in the regular season. Anthony Lamb (17.3 PTS, 39.0 3PT%), Gerald Green (16.6 PTS, 34.7 3PT%), and Christian Vital (13.2 PTS, 37.3 3PT%) all have no issues launching from beyond the arc, while also picking and choosing their spots to cut to a rim that is less crowded with all the floor spacers on the court. The extra space in the paint has allowed Kabengele to thrive, as he dropped a season-high 27 points to go with 10 rebounds and 3 blocks in the Western Conference Finals against Agua Caliente. The Vipers run a tight rotation, with Tyler Bey and Trhae Mitchell rounding out their usual run of substitutions, but are talented across all positions and have the shooting ability to stay in any game.

The Blue Coats are back in the NBA G League Finals for the second consecutive season after topping Raptors 905 for the Eastern Conference crown in a rematch of last year’s Semifinals matchup. They have unfinished business as well after falling to the Lakeland Magic in last year’s one-game G League Finals. The Blue Coats are also seeking to round out the season with multiple trophies after running through the AT&T Winter Showcase in Las Vegas back in December, where they won 3 games as the tournament’s top seed to win the crown. This team looks different than that squad, however, with several key absences. Winter Showcase MVP Jarron Cumberland is no longer with the team, and defensive stalwart Braxton Key is now with the Detroit Pistons after earning a call-up of his own. Two-way Philadelphia 76ers player Charlie Brown Jr. was instrumental in the two most recent wins for the Blue Coats,  scoring 28 points in both outings, but will be unavailable in Game 1 due to health and safety protocols. Rookie Jaden Springer, who has been with the team on assignment for most of the season, was electric in the Conference Semifinals win over the Motor City Cruise with 30 points, but was unavailable in the Eastern Conference Finals due to an injury and his status is up in the air for the Finals. Charles Bassey, the G League Player of the Week to end the regular season and a total mismatch in the post for the Vipers in this matchup, is no longer with the team after being recalled by the 76ers.

And yet, despite all these absences, the Blue Coats just continue to win. Myles Powell (22.4 PTS, 40.6 3PT%), the other two-way player for the 76ers, should have a green light in Game 1 after dropping 34 points on an efficient 11-17 shooting in just 25 minutes against Raptors 905. Shaquille Harrison (12.7 PPG in the regular season), the league’s Defensive Player of the Year, has stepped up to take on a larger scoring role too, posting 17 points to go with 13 assists, 9 rebounds, and 3 steals against Raptors 905 in a near triple-double performance. Aaron Henry has served as an undersized big man without Bassey or last year’s G League MVP Paul Reed in the fold, and has stepped up in a big way (23 PTS, 9 AST, 8 REB vs. Raptors 905). The Blue Coats made 18 triples against Raptors 905, something they’ll have to continue to do to match Rio Grande Valley’s tendency to fire from distance. Delaware operates at the fastest pace in the G League (107.42) and scores more points than every other team except their Finals opponent (121.6 points per game). The Blue Coats also led the G League in steals (11.8) and blocks (7.1), and while Harrison can certainly provide shutdown defense on one of RGV’s playmakers, not having Key or Bassey in the fold will mean that other players such as Karim Mane (2 steals vs. Raptors 905) or 3-time NBA champion Patrick McCaw (2 steals, 1 block vs. Raptors 905) will have to fill the void.