Look at an NBA G League roster and you will see players at different stages of their careers who took different paths to the pros: Recognizable names from high-profile schools; lesser-known small-school hopefuls. Undrafted players looking to catch eyes; NBA players assigned to gain seasoning.

Putting together a roster is a complicated process. To help make sense of it all, here’s a breakdown of the various avenues where teams find players: 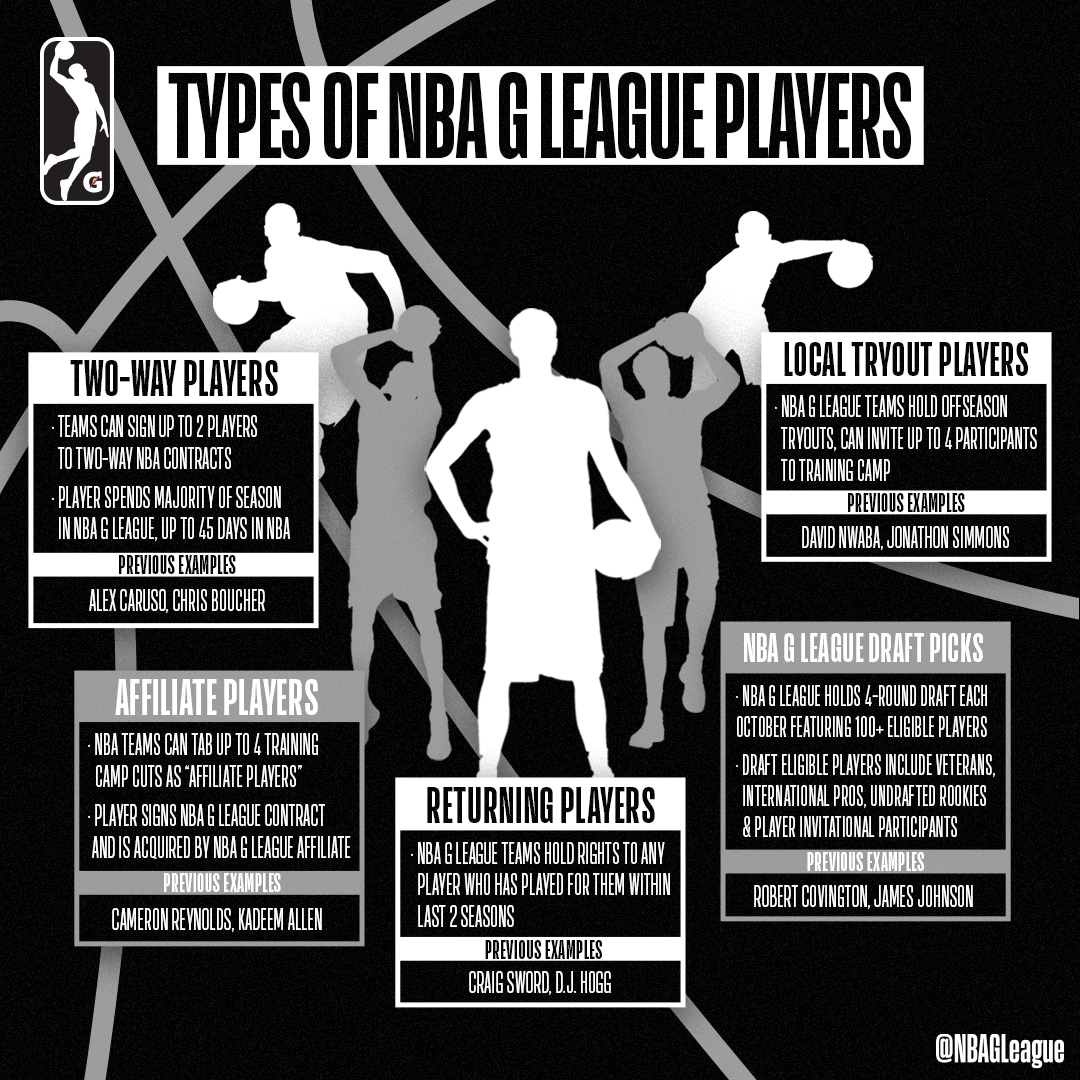 NBA teams may have up to two players under NBA Two-Way Contracts who will spend the bulk of the season in the NBA G League and not more than 45 days with their NBA team. Two-Way players are paid a corresponding daily amount based on the number of days they play in each league. Only players with four or fewer years of NBA service are able to sign Two-Way Contracts, which can be for either one or two seasons. | 2018-19 Two-Way Players

Teams hold the rights to any player who has played for them within the last two seasons, as long as they have not released that player.

When NBA teams trim their rosters during training camp and the preseason, they have the first crack at acquiring their waived players on their NBA G League affiliate.

Organizations can designate up to four “affiliate players,” though those players will remain NBA free agents. This still allows NBA front offices to identify prospects that they like and keep them in their system — especially given the current state of the league, in which all 27 NBA G League teams are singly affiliated with an NBA parent club.

NBA G League teams hold tryouts during each offseason, inviting some players to participate for free while attracting locals who pay a small fee to participate. The teams can invite the cream of the crop (up to four players) to their training camps.

A few dozen tryout players each year make their way onto training camp rosters, and many have even made it into game action and beyond.

“Mr. Mad Ant” Ron Howard authored one Cinderella story among that group, parlaying a training camp invitation in 2007 into a seven-year career in Fort Wayne, capped by a championship and MVP season in 2014. Houston product Jonathon Simmons completed a journey from the Austin Spurs’ local tryout in September 2013 to the San Antonio Spurs’ roster in July 2015 before breaking out during the 2015-16 NBA season.

Every fall, more than 200 players are signed by the league office and placed in the NBA G League Draft. About half of them are selected on Draft day, which features a field of NBA and NBA G League vets, international pros, undrafted rookies and NBA G League National Tryout players.

Many of the top picks arrive just days before the Draft after either arriving from overseas or being waived by NBA teams — a group that included eventual Westchester Knicks star Jimmer Fredette in 2015.

In 2014, the Oklahoma City Thunder made headlines for their decision to select Stanford forward Josh Huestis in the first round of the NBA Draft with the intent of adding him to their NBA Development League affiliate, the Oklahoma City Blue. He was called the league’s first “domestic draft-and-stash” player.

The Thunder could do this through a rule that was implemented just three months before they drafted Huestis. The “draft rights player” rule allows NBA G League teams to directly acquire players on their NBA parent club’s draft list, bypassing the usual NBA G League player selection processes, including the NBA G League Draft and the in-season waiver wire.

NBA teams can assign players with three years of service or less an unlimited number of times, and they’re taking advantage of that rule each season.

In 2014-15, 56 different players were assigned to NBA G League teams a record total of 195 times, including 14 first-round picks from the 2014 NBA Draft. With the advantage of having an affiliate within driving distance, several teams shuttled players back-and-forth between teams — including the Spurs with first-round pick Kyle Anderson.

A player who has not yet entered the NBA Draft can instead enter the NBA G League and maintain his NBA Draft eligibility.

Unlike the rest of the players signed by the G League, NBA Draft-eligible players are not eligible to be called up by NBA teams.

The NBA G League rosters you see every fall are typically unrecognizable by wintertime. That’s because the league is infused with talent throughout the season as players returning from stints overseas/NBA veterans working their way back into the league enter the player pool.

When new franchises join the league, an expansion draft is held prior to the start of training camps. Each team can protect the rights of up to 10 players while the three expansion teams can select up to 12 unprotected players, with no more than two selections coming from any one team. The teams will hold the rights to those players for two seasons.